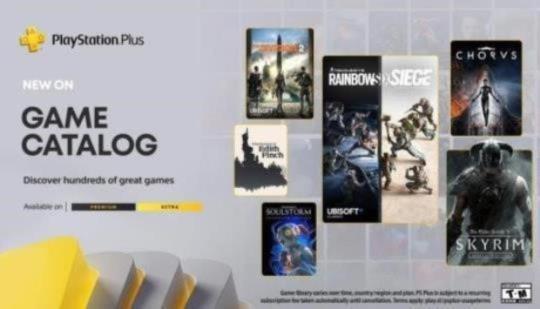 Today we’re happy to reveal the November Game Catalog lineup for PlayStation Plus. These games will be available starting November 15.

A bunch of Ratchet and Clank games though.

streamed. gross. I have a PS3.

Yeah, but they are only putting back what was originally on PS Now in the first place. This isn't worth the Premium Tier as of right now. They need to do a lot better on their legacy consoles titles

Insane lineup! Was actually thinking of getting back into Skyrim and always wanted to give Division 2 a go but never around it.

Umm if you want to “get back into” Skyrim wouldn’t that mean you already own it? I mean like 95% or the human population owns a copy of that game in some format.

I’m just confused as to how you’re excited to get back into it when you could literally buy the game for $5-10 for years now. The Division 2 has also been $10 for a while now.

Your excitement just seems a little inauthentic and cheesy. If you really wanted to play those games you could have by now and for dirt cheap.

Last time I played Skyrim was back when it originally appeared on the PS3, so going back to it would feel like somewhat of a fresh experience, with better graphics ofcourse. Also never touched the DLC so that's a plus!

Since I have a full-time job and value my social life a lot, I don't have all the time in the world to try out every game I'm curious about. The Division 2 did spark my interest but since I was pretty disappointed by the first one I decided to give other games more priority. But now that I've got some time off from work and Sony is offering it through Plus, I might as well give it a shot. No way I'm able to finish it but that's ok.

Also, Im a big sucker for the old Kingdom Hearts games, so happy for anyone that's gonna give them a try.

Wether you agree with me or not, don't let it ruin your day, alright?

Man PS Extra just isn't impressing me. I dont care that there's no big AAA games releasing day one on the service but the stuff they are adding is just old filler. I've played already.
Gamepass games might not all appeal to everyone but at least they give a broad mix of new games. Road 96, Echo Generation, Turtles, Streets of Rage, Signalis, Ghost Song, Somerville. They're all great additions.
Sony should have made some deals to bring the likes of F.I.S.T. RollerDrome and Inscryption to the service or games like them. Something of value.
I guess I got the wrong impression when they gave us Stray.

I feel the exact opposite. I have only played three of those games. I'm definitely taking advantage of this month.

Good to hear. Hope you enjoy something you might not have otherwise

What you are saying makes sense for you because you have bought so many games. This isn't the case for most people. Services like this are great for finding and trying ges we might have been apprehensive about in the past. I finally get to try Ghost Recon, Earth Defense Force and KH 2.8

I understand your point of view tho.

Echo Generation was an absolute blast to play. And I am enjoying Signalis at the moment, in between OW2 play. I definitely agree tho, the offerings for PS+ seem to be left overs from GP, they definitely need standout titles to make their service more appealing.

I guess if you don't have both consoles these would be some good games to play, but again, just as you stated, Sony should make more deals to bring games like similar to Stray to their service.

There is another option; buy what you want to play instead of relying on a service to grant you access. All the games you mentioned are available for purchase. Sony is already granting a lot for only 120 yearly, that is equivalent to buying two games. Be grateful....

I have bought those games. Well with the exception of Rollerdrome, I havent got that yet. And I have a library of over 800 games so you don't need to worry about my spending habits. I'm just saying the value just isn't there in the service for me. I find they do fantastic with the choices of games for PS Essential but Extra is disappointing and Premium is a joke. They really did just rebrand PSNow and there's no extra effort being made here. As it is, if my sub was up this month I wouldn't renew it

Cool story bro, but I assure you that your spending habits are of no concern. While every person has their own taste, what stands out to me is the fact that you have 800 games but are complaining about what one serve offers over another.

I have well over 10k games but there is always an opportunity to discover and purchase more. Sony has one of the richest libraries acrossed several platforms so they don't need to offer more "appealing" games as they often just sell those. What sense would it make to give what's willing to be bought? GP has to appeal more because they're both losing market share and have a community of thrifty gamers. With a despondent economy of gamers you can't risk not offering everything to keep them engaged.

For now. Stray was a day 1 release for instance. So was shadow warrior 3

Fist looks incredible. Ive been waiting for a sale.

It's a great game! I got equally excited for Clid the Snail but that was a dissapointment.

Your opinion is the exact opposite of mine. I think the value of PSPlus is higher for my style of gaming.

Sony needs to just come out and address the state of PS1/PS2/PSP classics to the public.

You do have a point. I want more classics. There loaded ps1 ps2 wise. Whats the deal. I still think the service is on par with gamepass where everything stands right now. But i need sone of those classic titles.

PS Plus has been such a disappointment so far

Now I don’t have to. Would’ve been mad if I bought a game only to have it be available on PS+ the VERY next week

They really need to up their game on the service, minus the nostalgic PS1/2 titles, it's been a disappointment since launch

Hows it been a disappointment. Theres some pretty great games on it. We all know 1st party games aint coming out on it day one so i hope that aint your disappointment.

Orchard, your comment is the opposite of reality. lol. I don't think they even added any PS2 games. They've added a few PS1 and PSP games.

The classics part of the service has been the worst part, and the part that people are actually complaining about.

Whereas, PS Plus Extra has been fairly good. Have you actually used the service ... ?

Don't have a problem with Extra or essential but I have an issue with the premium tier
Where are the promised PS1-Ps2 and PSP games?
https://blog.playstation.co...

You should try the deluxe their now that's a completely ignored made up tier for people outside of psnow streaming regions like Australia.

I said when it first launch. Deluxe/Premium is best to give another 2 years before anything worth while if you mainly focusing on PS1/PS2 games.

It was too buggy for me to complete. A quest bug (where I chose to pick up a ring instead of a werewolf pelt) meant it was impossible for me.

It was all over the Skyrim forums. Bugthesda knew about it and didn't bother to fix it to this day. Pathetic.

I dont even like skyrim. Fallout on the other hand i fk with that

Bought the collectors edition day 1. Was bored of it within a week. I was extremely disappointed.

Already played all of the ones in this list im interested in.
I think they should try to do a little better next month. Good additions though.

adaminoregon78d ago (Edited 78d ago )

Skyrim? Whats that never heard of it. But seriously, i will play chorus. Probably thats it. Got division 2 for 2 dollars on sale a year or so ago.

whats going on with the tags of this article haha.

Man was hoping for Syphon Filter 3 :(

As much as I like the Ratchet and Clank series though, the premium tier is still disappointing so far.

PlayStation Extra and Premium in 2022: Was it a good deal?

PlayStation Plus’ free games for 2022: The most value for the least cost