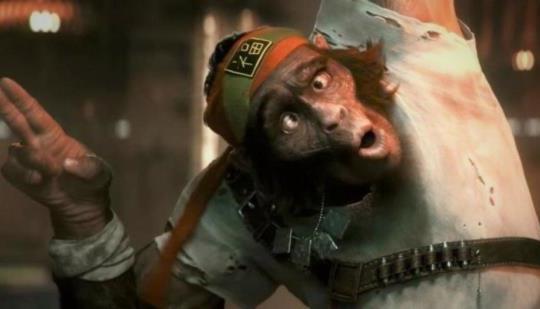 Ubisoft's action-adventure even beats Duke Nukem Forever which previously was the title with the longest wait between a game being first announced and it actually being released.

I understand that the original game is held in high esteem by some passionate fans. I tried to get into it on several occasions and I just lost interest after a few hours of gameplay.

Beyond Good & Evil was a great game at the time... but, like most older games, it didn't age well. Gameplay and graphics are subpar by today's standards.

Wouldn't mind if they made a Remake with updated gameplay and graphics. Game turns 20 next year...

I feel the same way about the original Psychonauts. I gave it a shot every few years, and it just wasn't for me.

I find it still very playable by today's standards, honestly.

But opinions are opinions.
I just feel it actually aged well.

Its was great middleware that someone thought would make for an even greater AAAA title.

Beyond Good and Evil aged just fine, as did the original Psychonauts. Visually, sure, a bit rough (though both have a wonderfully refreshing art style that more than makes up for actual "visual fidelity".)

I'd say that you really need to give both of these games another shot. Psychonauts is one of the most original and utterly creative games I've ever played, and it's also one of the funniest as well. Psychonauts 2 was even better, and basically, a (well made) Pixar movie brought to life.

In all honesty, don't just play games and try to like them if you don't actually like them. It's perfectly fine to have your own tastes! we tend to use a tremendous amount of hyperbole when referring to games that are slightly older, and we speak only from memory, which *can* be deceiving.

I will say that I replayed the first Psychonauts again in the last few months, and still adore it. But like I said, this is all subjective.

I gave up on the og psychonauts after about 5 or so hours because like many many people those weird sluggish controls just got the better of me while trying to get through some of the more testing platforming and swinging around parts.

BgaE I got way further in enjoyed, I think I saved it off in the end because something I was more interested in came out. The sequel looks like a completely different type of game in genre and scope, to the point it looked pretty ground breaking I thought. I’m still super low key excited for it, although I wouldn’t be surprised if next time it reared it’s head it looked very very different.

It's an age thing. I'm always reminded of this when I whip out the old PS2, the vast majority of 3D games from the '00s just haven't aged well.

I have same feeling over Code Veronica X fans loved it to bits while I'm came out of it confused and disappointed.
I never played Beyond Good & Evil and I might get give it a try soon.

Cancel it or change the name for all I care. This isn't the Beyond Good & Evil I fell in love with.

Weird take. Whilst we didn’t get proper gameplay reveals it looked very much how I would want BG&E to look now.

So you wanted an ambitious open world Beyond Good and Evil sequel that gameplay differs from the original and has no clear vision so far if it's a prequel (which no one wanted) or a sequel (with an evil Jade where she's not the main character, which no one wanted)

All people wanted was a full on sequel that's a platformer and continues Jades story.

It's not Beyond Good and Evil

They had an idea for an ambitious new IP and thought it would sell better or had more of a safety net if they slapped on a franchise name.

Seriously, has absolutely nothing to do with the original other that a loose cameo.

How hard is it to make a game like the original? Nobody wanted anything different and these idiots just insist on trying to make something completely unrelated AND they don’t even know what to make! So, yea, here we go with the delays. Ubisoft can be such an obnoxious publisher/developer.

Just leave it alone, the original is a classic lets not ruin it.

I'm more worried about how fast that time went i still remember it being announced there is no way that was that many years ago NO WAY!

This has just been an absolute mess from the getgo.

Good/great first game, nice characters and world, and all Ubisoft really had to do was simply build on that, so a new SP story-driven action-adventure game. That’s all they needed to do. Bigger & better. That’s it.

Instead, Ubisoft somehow decided, after years and years and years of development-limbo, to make this sequel a GAS open world always online ‘whatever’. And as result, pretty much every fan who was interested in this, have given up hope on this project.

From what I've seen it's only "Beyond Good and Evil" in name alone.

Now being in development hell ... just let it die.

The game announced in 2008 was confirmed to have been cancelled and abandoned. The game in development now might share the same name but it's a completely different project. Calling it "uninterrupted development" feels like a bit of a stretch.

XxINFERNUSxX58d ago (Edited 58d ago )

Ubisoft should have pulled resources away from the same games every damn year, like Assassin's Creed, & Far Cry, and put them towards Beyond Good & Evil 2, if they did maybe the game would have been released this year or earlier. Or even better find some other studio that can develop it, and do a better job. Ubisoft you can shove your Assassin's Creed and Far Cry up your ass.

Not trying to piss in anyone's Cheerios, but I never saw the appeal of the first game. I have it on GOG or Steam or something. I don't even remember. But like someone below said, I gave it a couple tries over the years. And it just never hooked me.

So I don't understand how it has attained this legendary status where people keep talking about it and this vaporware sequel. I followed gaming press back then more than I do now, and I just don't recall that much hype in the industry for the IP.

Ubisoft doesn't like single player games because they can't pour micro transactions into them. That's why they violated this game in more ways that makes it not even recognizable as a sequel to the first game.

The other reason is that Michael Ancel is no longer there at Ubisoft. If your parent company isn't interested in making your games after all the hard work you put into the company, you move on. Rayman, King Kong, Rabbids, etc. You'd think they'd give him a second shot at making BG&E a hit. Even though the first was awesome for it's release time frame. A light hearted Zelda like adventure with memorable music and characters.

The other game that's in development hell that's probably cancelled which was being developed by Michael is Wild. Where's that game?
https://youtu.be/0cRlwXo9C-...
Was supposed to release and be published by Sony. Nowhere to be found either now that Michael is gone.

I wouldn't touch this sequel even if it did come out. It doesn't even have the same flavor. Won't even have the stylized music that made BG&E what it was. If it's not multiplayer and micro transactions, they don't want it. Which is why I don't buy their games anymore.

Most of their games are single player lol in fact which why they love putting micro transactions into them.

When a live service, microtransaction open world is priority, game gets lost.

They probably canceled this game

Whatever happened to Ubi 😔. Fond memories up until midway through PS4 since then an absolute disaster.

Somebody is letting them take their time… let them take it. We don’t need more memes

I have a bad feeling about this. It's gonna be choc full of live service elements... i can just feel it.

does anybody still care after all this time? really?

So you're saying it'll most likely release on PS6 then... Correct?

Anyone have an original pre-order receipt?

They wanted to make this a live service and they found out that people weren't to happy about it among other things. So they have to either do a ton of work to cut out the live service elements or scrap the game.

5 Unanswered Questions We Have After Ubisoft's E3 2021 Showcase