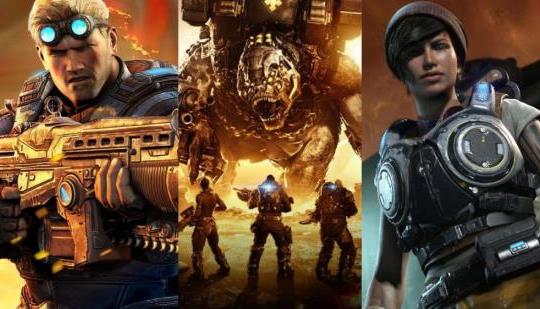 The Gears of War series has been a consistent deliverer of quality for Xbox, but which games are the best?

Gears of War is my favorite video game franchise, and the Locust is my all-time favorite faction.

Agree 100% with this ranking. The campaign in Gears of War 2 is among the most fun campaigns ever made. It’s been downhill from there.

I’d say gears 2 and 3 are pretty even. I absolutely loved both of them.

2 is still my favorite but 5 is also up there (for me). Then I'd say 1, 3, 4 and Judgement. Tactics isnt the same type of game, so it seems odd to rank it among TPS when its a strategy game. So I make that one all its own. Pretty fun game too.

The first is and has always been the best one imo - the story, the levels, the set pieces, the soundtrack - as close to perfect as a campaign can get.

I’d say the series had been on a continual downhill slide until 5.

I love the series as a whole, but 4 was pretty by the numbers, and Judgement was just ok.

I played them all since picking up a Series X about 7 months ago. Personally, I don't think time has been kind to the earlier games and they feel very slow and repetitive to play. Whilst the newer games may be prettier, they stick with the original gameplay mechanics too much in my view so as a whole series of titles, I think they are pretty average games.

Not to say they weren't fun and I have a lot of nostalgia for 1 and 2, I just think there are far better action games out there.

1 and 2 for sure 3 was ok Dom's death felt rushed to me. Judgement was meh 4 was ok and 5 I thought was boring.

4 & 5 had some bullshit practice’s for MP characters and skins.
Judgement was very casual.
2 had the best maps and good gameplay if it wasn’t laggy.
3 had okay maps (too open) but the gameplay was the best.
1 was solid all around.

Judgement has the weakest campaign and multiplayer. Gears 5 would probably be ranked lower if it’s multiplayer didn’t mature well. The game improved significantly in terms of progression and content from launch overtime. While, Gears of War 1 was the most influential title of the series it hasn’t aged as well as it successors.
Gears of War 2 is number one for me due to its plot, introduction of horde and personal nostalgia, despite 3 being objectively better, in my opinion.

I Haven’t not played the spin-off titles, as they belong to genres that don’t interest me.

As an aside: I waiting for my EARNABLE or FREE COG still Spartans to be added to Halo Infinite. Spartans Emile and Kait were in Gears 5 mp, so 343i should reciprocate the Coalitions cross-over.

Based only on the campaign. 2 was almost perfect; 1 (as a start for the franchise) was amazing too. 3 had some issues, but mostly very enjoyable. Judgement tried to move some stuff around but mostly stayed with the same crew and very basic story. 5 and 4 (campaign-vise) were pretty bad, didn't feel like they were important for the Sera as a whole (maybe that's how it felt to me).

Amazon Xbox & Switch Digital Game Sale: Save Up To 87% Off