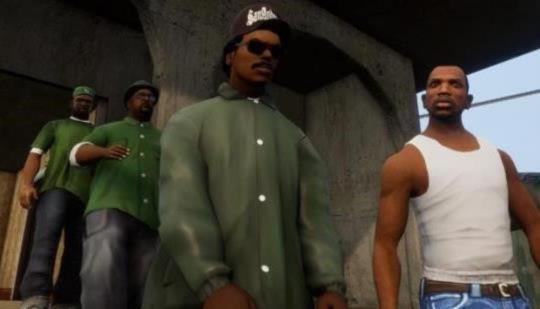 Take-Two CEO Strauss Zelnick has described the launch issues that plagued last year's release of Grand Theft Auto: The Trilogy as a 'glitch' that has since been 'resolved'.

Then that must be one train wreck of a glitch.

All they had to do was follow the damn train!

Spin cycle is on.

The patch fixed a ton, but it's still far from even equaling the original, let alone being the definitive versions. So many missing and off details that it's painfully obvious to anyone who spent any real time playing the originals.

Do you know if there are plans to release any more significant patches such as native 4k version?

I mean from the sounds of this, probably not. Sounds like they think it's "done"

I 100%'d GTA3 and Vice City and I can't say there is a lot I noticed that was inferior to the originals.

They aren't perfect, but I think they're worthwhile as a fan.

How are they worthwhile when the originals are still playable and are superior?

It's called an opinion, pal.

Ask fewer stupid questions, and maybe make a case for the originals that actually offers some substance.

@MrBeatdown: Well, for example "Definitive Edition" is missing 29 songs. So, 2 hours of music is just cut out because Rockstar doesn't want to pay for rights.

That's been the case for every version released for the last ten years or more. It sucks, but doesn't affect the playability.

You're only getting those songs if you play 20 year old versions with graphics made for a CRT tv. I'll take HD graphics, improved aiming, better textures, and auto saves over the soundtrack missing from the originals.

It absolutely hasn't been resolved. Some stuff is fixed. But there's nothing "Definitive" about these versions. They have terrible replacement effects, or are missing effects entirely. Way too many textures that after being cleaned up look horrible compared to the originals.

Definitive isn't supposed to mean "ok", it's supposed to be the best version available. Yet the originals with mods look significantly better. You choose between 60fps and *slightly* better graphics/lighting. These are remasters of PS2 games. If you can't do it all at 60fps that says a lot about how much optimization went into these.

that's because they used the mobile versions as a base.. not the ps2

Yeah, unfortunately. What a shame.

A glitch?! What a slap in the face to consumers. These games were a rush job and a cash grab - nothing more. The issues haven't been resolved and they are an insult to the games' legacy by calling them "definitive".

Should've waited for a price drop instead gave 60$ to this money-hungry company.

Why did this get downvoted lol? This is exactly what everyone should have done. The game was showing red flags before it even released.

He obviously hasn't played it then.

The the existence of this subpar "definitive" trilogy is one massive glitch, that never should have been. The way his comments are phrased only shows how out of touch he is with gamers.

Last I heard this "definitive" version of the game was missing the two player mode. You can't drop features and call it that.

This is what happens when the weak let it slide.

I hope you all realise how much of a mug he’s taken you for now that he has your money.

I died when I read this. It's such BS lol.This reminds me when the higher-ups at CD Projekt Red said they didn't know Cyberpunk 2077 had all these glitches, bugs, and was straight unfinished.

resolved so well it hasn't really been resolved yet...

Worthless company with a worthless CEO

Somebody please wake zelnick up.

Glitch.
Knowingly releasing a broken product to your consumers with little recourse on their end.

Oh I totally understand, just like my wallet had a glitch.

These games pushed the limits of gaming in culture when they were released, such a massive letdown that their most significant moments since have been reduced to all of this.

This is the kind of treatment you get if you're a dead franchise and your publisher wants to see if there's any interest *but* doesn't care either way.

It's a still has ongoing horrible glitches.

I played GTA 3 on PSNOW and I didn't experience any glitches but aren't Vice City and San Andreas still very buggy? Sounds like they don't plan on patching them more by that either

I had one instance of a random NPC's car's front end stuck in the ground. Another time, an NPC didn't fall of a motorcycle, so he and Tommy were riding it at the same time glitched through each other. The worst glitch was one slot in my save file would crash after loading. I rotated save slots so I only lost a half hour or so.

I played GTA3 to 100% first, and found that worse. I haven't noticed anything in San Andreas aside from it being too dark.

I'll also say VC and SA look way better than 3. GTA3 was so basic graphically that their wasn't much to remaster. The greater detail in VC and SA originally makes the remasters look that much better.

I'm glad I decided to not buy this disappointing mess.

Either don’t buy it at all or get it second hand. Don’t prove these guys right by giving them your money.