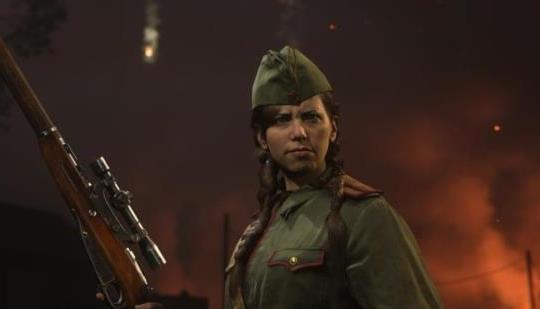 "We need more than iteration, we need revitalization."

You can say that again. Game has become repetitive and stale. Nothing new same and old story. The franchise also needs to move into future settings.

I disagree on the future settings

I disagree on the World War setting. I’d much rather see future settings going forward.

How about..Call of Duty "Samurai Setting" or Call of Duty: Middle Age Setting instead of more future / scince fiction settings?

Some drastic changes sometimes could be awesome.

I was hoping for Bacterial Warfare

They already take alot of liberty with the "history" as it is. It's a reskinned Hero shooter.

Absolutely not a future setting, they need to do what they do best make it somewhat relevant to what's going on in today's wars and conflicts. Make a game that relate to that. And for God's sake a new engine. That's the main problem along with the lag of love for the game.

No one wants future settings. Each time they do it aside from Bo2, it’s a complete disaster.

This is part of their dilemma WW2 is played out and they don't know how to do a CoD set in the future. They will inevitably add jet packs again and people hated those. If they are going to be futuristic only the weapons and killstreaks should be affected but they got rid of all the good developers so they will not balance it properly and put out some overpowered gun and everyone will complain again. So they have to stay in a modern setting or slightly future setting but remain modern but they don't know how to innovate. It's the same guns every year, bad maps, and more shitty skins. CoD is dead i have no faith even if they got rid of yearly releases that they are competent enough to make a new one that is great. The multiplayer will keep losing players so they will eventually just make Warzone the focus for CoD for the battle royale gamers.

I want one set in the future as well, but CoD has been at its best with modern warfare (no pun intended).

I never played Infinite Warfare, so I can't speak on that. But I really liked Advanced Warfare. The campaign was also super solid.

Remember when we got like 5 years of purely future only settings nothing modern and or historic it became very stale.

They did future settings multiple times already and people hated it. It's not just the fact it was in the future, it's the fact that all 3 devs used the same setting back to back while using some new movement system nobody liked. Right now the 3 studios are stuck in this position where each of them only sticks to one era so they don't overlap. Infinity Ward with Modern era, Treyarch with Vietnam/Cold war era, and Sledgehammer with Old war.

Changing the era does absolutely nothing different to the series as they've demonstrated. What needs to change is how the game is played with the same exact pacing and mechanics every game. Even with the new engine used for MW19, it didn't change the fact the maps were god awful and contradicted the fact the game is a fast paced instant kill game that pushes people to camp. The entire game feels like it wants to be played slower paced with the movement and animations, but it does nothing like that at all. I don't think they'd ever change that fact in the series, but at least start by not trying to appeal to both sides at once and screwing up both.

Call of duty franchise is like Pokemon franchise or even Madden. Every fan of the franchise want better games, better story, better graphics, but everybody else buy the crappy yearly release anyway. Why would Activision change anything to Call of Duty when it's the best selling games every year?

Exactly, and if they change up the formula too much fans will be pissed, so they stick with small changes to say they tried something different when really they took no risk. This ensures profits and that’s all it’s about.

The game needs more dinosaurs. Is that too much to ask?!

I'm just over CoD. Vanguard was the first CoD I didn't buy since I started playing in 2006. I don't plan on buying into the game franchise again

LucasRuinedChildhood145d ago (Edited 145d ago )

I only bought 2 COD games after Ghosts (Black Ops 3, Modern Warfare) so I haven't played that much of the franchise in the last 8 years.

As much as I'm over the franchise, I do think this year will be a big year for them though. This one's Modern Warfare 2 (2022).

We'll see. I did enjoy the MW 2019 campaign so maybe I'll buy it just for that

Same, never missed a cod since cod 1 on the pc and the ropey ps1/2 ports. Vanguard did nothing for me. Also, go woke go broke. (You too marvel)

The sooner people stop buying this crap, the quicker we can get Singularity 2

As much as we few like the first one, Singularity 2 ain't happening.
Check the actual story, it has a bad rep at Activision and was once nearly cancelled.
https://www.polygon.com/201...
Hypothetically, lets say there's a possibility or hope of a new Singularity project.
Then I'd want the actual Singularity game which was envisioned. With massive time manipulative gameplay concept and accompanying complex story.
Not the cheap Soviet Bioshock clone they had to eventually resort to shipping (again, check the above link, excellent read if you're unaware).
Just 11 months to turn around a wreck from development hell.

I almost feel like they've done everything that can possibly be done using semi-realistic battlefields with humans. Maybe a COD: Independence Day with Aliens?

You could argue that making the jump from WW2 to Modern Warfare, years ago, was a form of revitalization. And it worked, but I don't know what they could do at this point besides take a couple years off and really hit the drawing board hard.

One of the big problems is quality. That has dropped significantly. So many issues with them, it started with WWII that has stuttering in the campaign just like Vanguard.

How about setting it during the Revolutionary War?

I would play this.

They need to make a single player campaign in a world war 2 sci-fi type setting kinda like what they did with latest WOLFENSTEIN games.

or just give it a rest.

How about COD take this tired horse out back and put it to sleep ? 15 years off the same thing.

Easy to do. With 5his much source material they could recreate some aspects of these wars in such great detail...but focus on the cinematic experience along with great stroytelling.

But you can't forgo a great campaign...that's the problem nowadays.

I think they should do a world war 2 sci-fi setting like they did in the recent WOLFENSTEIN games for the single player campaign. The wack-a-mole style gameplay that COD has is very boring!

It needs to be taken behind the woodshed and put out of its misery. Move on.

Go black powder and cannons and get rid of the minmap.

most fan probably been saying that lol

It needs to go away for a few years, have all the devs who work on different cod projects work on one huge title, then come back with proper innovation.

Why just dont cut out Fortnite crap from te game and just make game with normal guns and serious tactical solders not aliens and zombies, no calling card and other kids stuff. Just regular game like Mohaa and Cod2 were in the time.

Just take a year or two off. After MW2 this year don’t put out another crappy Black ops and for heaven sakes-no more WW2. Have those teams do something else not related to COD, then have MW3 come out in 2025.

I felt that mw did that and am excited for the sequel. Treyarch and sledge however need to revitalize. These 2 studios are only making very lackluster spinoffs at this point. How do you fix that? By not releasing a cod game every year and giving each studio time. Or let all 3 studios combine. Treyarch just do zombies, iw and sledge do the rest. But activision will never do this so itll be like this forever.

PlayStation Studios Is Preparing to Invest Big in New IP