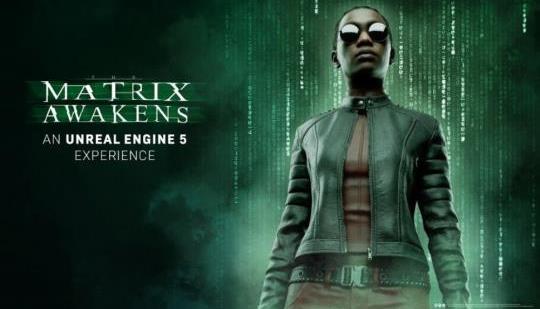 COG: Acting as a hype piece for the upcoming film and a showcase for the Unreal 5 engine, Matrix Awakens is a glimpse into an incredible future.

Adhttps://n4g.com/General/Sponsored/arise
- Comments (35)+ Comments (35)
TopNewestOldest
Expand all
The story is too old to be commented.

I have to agree. This looks simply stunning.

Played the demo. Cutscene was impressive but car chase was completed without pressing a single button. On foot section was no more impressive than Miles Morales in terms of city design or graphical quality. Also REEEEALLY enjoyed the woke agenda of putting a no name black woman as the main protag instead of Neo or Trinity. 😂😂😂
“Everything woke turns to sh—“

What nonsense are you going on about?

I bet this person is a hit at parties. Can't even play a tech demo without letting ignorance and racism shine through. I'd rather be "woke" than still asleep like this person's fragile mind.

I think that was supposed to be Jada Pinkett Smith character. You know from the old trilogy. Way before so called wokeness.

yes it seems par for the course in most games and movies lately.

I tried it on my friends house last nite, i have to say i couldnt believe how good it looks, i cant even imagine what we will see more into the future.

Performance is all over the place, often below 30 fps. That's not a future I want to look into.

I agree, I mean it looks amazing but we need that 60fps which I'm guessing will need more powerful hardware. Without it, 30fps and below just looks like a juddery mess in motion.

Stop ball aching about frame rate, obviously you were playing something else. Far from a juddery mess. Get over the [email protected]@kin fps obsession!!!

The traffic and crowds are defaulted to 100%. Try turning one or both down. But it is just a tech demo after all, lighten up.

so try making a city less like a city? lol

There's always that one guy lol

Or female, or trans, or tree. What are they "identify" as

PC should run it better.

Not for most people it won't.

While it would, it would maybe max get 30fps at 4k. And that's with a very expensive computer.

The average pc owner has a low to mid level rig.

The point of the demo is to show what's visually possible. Everything was cranked to the max, simply lowering the car amount by half, and parked cars by half dramatically increases performance.

Having played through this a few times, I disagree. Also have you looked at the dashboard, and seen everything running real time? It is definitely a current gen showcase. UR engine 5 is still being worked on, and tweaked. Can't wait to see games in 2 years.

Imagine being so incredibly short-sighted that you don't even know the purpose of a tech demo. Yikes

That's literally why it's a look into the FUTURE when performance can match the graphics. If it was 60fps with those graphics we'd already be in the future.

how dare you say objective facts

Will be interesting to see how it performs on PC with a 3080, and next gen 4000 series later next year should perform great in UE5.

We could have had full games like this already but everyone wanna do cross gen.

Yeh its that installed user base thats doing it. Sell your game to 100,000 people or 100,000,000. Easy decision for them but I totally respect the devs that want their games to look their best over having mediocre cross gen graphics for more sales.

The youtube channel Coldfusion had a good analysis and observation on the graphical leap and tech the UE 5 displayed on the Matrix demo
https://youtu.be/gry36cT3Td...

What the article doesn't mention is how every single car and building is fully rendered at all times. It doesn't use tricks to degrade 3D model when it's in the far distance or out of view

well, if its out of view you shouldn't be doing anything with it at all outside of logic. culling exists for a reason.

this tech demo is insane, some people arguing about the framerate but they aren't seeing the bigger picture here, literally the whole map is a living entity with dynamic effects everywhere, and that has never been done in a videogame but now is possible, and even at that, the framerate can go from 60 to 30 fps and yeah sometimes below that, so now think for a second, imagine this wasn't an open world map like this, a hallway with thousands and thousands of effects and physics can easily run a 60 fps no freaking doubt on next gen consoles, last year demo by Epic with the girl and cavern and stuff can literally can run at 60 fps with ease, this is the bigger scope nobody is seeing imo. I remember the fight between Neo and hundreds of Smiths in Reloaded or the final fight in revolutions, pretty sure we can have sequences in realtime with full character control like that running at lock solid 60 fps now.

Really is amazing how much of it ISN'T pre-rendered. Highly recommend the Digital Foundry video on it. How much of that intro video is in real time is absolutely insane...parts that looks like clips from the original film are actually re-creations in real time.. About the only pre-rendered sequence is where they make the clones of Trinity.

lol yeah.. I think UE5 can do great things, but I was far less impressed with the demo of it on my PS5 than I was of the cave demo. There's an awful lot I dislike about this demo.

it's not. It's just a small empty shell of game where 70 people worked on for 1 year.

No one is going to spend great budget just for this.

Wanna know which games are now running on UE5? Fortnite...

UE5 was just completed internally. Obviously the only games running on it now is fortnite. Did you forget hellblade 2?

The Matrix Awakens vs the original movie - and it's shockingly close

The Game Awards: What To Be Excited For Next