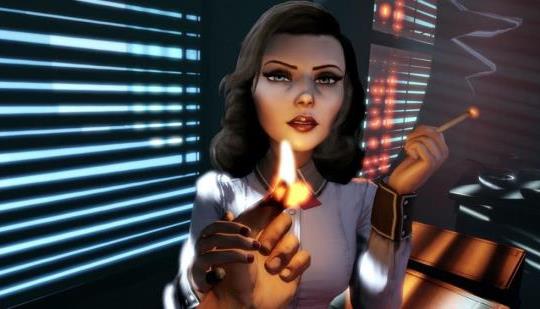 The best games are able to create a never-before-seen setting and weave a completely engaging story into its DNA. One series beats almost all others out for its environmental storytelling and narrative: BioShock.

I love them all

Infinite better than 2? No way

IMO Infinite is better than 2... The only thing I remember from 2 is playing as a little sister. It felt too much like Bioshock (which wasn't bad). Infinite was the right stepping stone.

Infinite was a huge step back. It played like a generic fps because it was dumbed down to be an fps and it's not at all the gameplay evolution Bioshock needed. It was a mindless shooter where story and it's world building took a backseat to repetitive shooting galleries against dumb AI while making you look for health in trash cans cause they removed mechanics that worked in favor for a more action oriented gameplay.
I think people are remembering Infinite all wrong.
It's story is a mess and it's world isn't as fleshed out as Rapture was in the first Bio.

LucasRuinedChildhood527d ago (Edited 527d ago )

"It was a mindless shooter where story and it's world building took a backseat to repetitive shooting galleries"
Sounds more applicable to Bioshock 2, tbh. B2 has wave-based gameplay where Subject Delta casually goes through large hordes of splicers to protect Little Sisters. C'mon. I still wouldn't call any of the Bioshocks mindless shooters though.

If you want to criticize the lack of the weapon wheel and the replacement of certain mechanics in Infinite in favour of increased mobility (e.g. addition of the sky-hook), fair enough, but the story and world-building of 2 are less memorable, noteworthy and interesting than Infinite by a huge margin. Most people don't even remember much beyond the basic premise of 2 (including any of the characters) because it felt so unnecessary. It's not even close.

"It's story is a mess and it's world isn't as fleshed out as Rapture was in the first Bio." Needing to use Bioshock 1 to criticize Infinite instead of 2 is an admission that 2's story is the weakest.

I remember it being very imaginative and a breath of fresh air, while still being familiar. The last hour or two was big on shooting.

Infinite was the most boring and repetitive in terms of gameplay. It lost the suspenseful atmosphere of the first 2

Am I reading that backwards or are you really shocked that people like infinite more than 2?

Just wanna make sure I have it right because you're literally the first person I've seen say that 2 is better.

I understand 2 is more of the same but I much prefer more of the same than going backwards in terms of gameplay. It wasn't the step in the right direction. But thats just my opinion, I'm not surprised at all. Just to me I much rather the first 2. However what they had planned for Infinite originally sounded very interesting and it sucks we won't ever see it

Imo 2 is tied with 1 as my favorite Bioshock. The gameplay is the natural evolution of the first, with more freedom to experiment. The story and locales are more intimate and less grandiose than you would see in a Ken Levine story. I love the atmospheric break of the underwater sections and never understood the hate for them. All 3 games have pacing issues but imo 2’s are less severe. The level design has a lot of ex-Looking Glass alumnis and is generally more open ended.

The endings are more tailored to your moral choices than the other games.

Infinite hedges on a admittedly cool twist that is poorly executed when scrutinized. The gameplay takes a huge step back, it isnt the game that early gameplay and trailers promised. The world is less fleshed out. It was prescient politically and that makes it interesting but otherwise i have no desire to replay it.

2 had better gameplay but 3 had a better story

Hurts to see the word "worst" related to Bioshock saga.
The 3 games are masterpieces.

oh great. Can’t wait to see the posts of game titles in a ranked order without context as to why.

I wish I could replay them as if I was playing them for the first time. All of the Bioshock games are amazing.

I bought the trilogy a while back. I played 1 and 2. They were fun. I still have to play the 3rd one.

Get on it! Then finish it with the Burial at Sea DLC 😁

Infinite's ending doesn't narratively work for me because (spoilers) the versions of Booker that choose to keep being Booker don't become bad, why kill him?

I wish there was a Bioshock 4

There will be 😁 it’s not Levine though so who knows if it will stack up. I like to think they wouldn’t be reviving it if they didn’t have a good gameplan though.

They've been developing it for 7 years

Not sure why the expansions are being ranked as individual titles in the Bioshock series.

I love them all though.