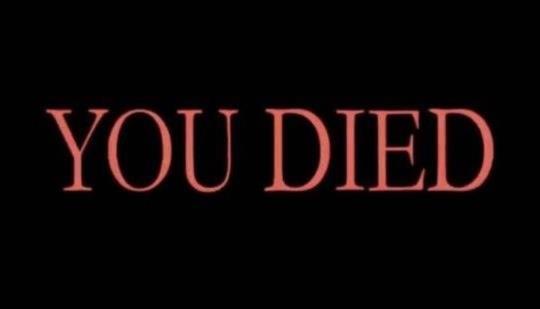 Why ‘You Died’ Works Better than ‘Game Over’

"You Died" is more effective than "Game Over" upon failure in video games for a variety of reasons, both technical and narrative-driven.

Missed opportunity for “Git Gud” tho

There's no such thing as game over anymore, when the games aren't holding your hand walking you through with 2 levels of tutorials, they're giving you infinite lives and health that regenerates as soon as you get away from the enemy for 5 seconds.

y'all can disagree all you want, but find me one modern game that isn't an indie retro throwback title that has a limited number of lives and continues, no health regeneration, or tutorial levels. I'll wait.

Indie games is where art is.

AAA gaming is distilled to serve to the lowest common denominator of the market.

What is your statement actually? That all games are holding your hand? that all games have tutorials? That all games give you infinite lives? and health regenerates?
Because that is factually incorrect.
Actually, even old games had tutorials, (less difficult levels or straight up tutorials) yes, a lot and for sure more games have regenerative health, but not all of them. And not all games had a finite amount of health back in the day, also that was one of the ways to make a game replayable, now with longer games you also dont need that as your main source of replayability.
Anyway. still dont know what you want to say. A negative or a positive?

lol theres stacks of games that you can turn up the difficulty to maximum and you will have 1 life, no regen, sometimes no hud etc etc.....its all about accessibility frosty - the amount of $ it takes to create a game these days why would you make it so hard only a tiny % of the population would want to try it....doesnt really make sense my friend!!!!

I am not aware of any Souls/Bourn game that has health auto regeneration by default. Games like The Witcher 3 has an attribute that you can select fairly early in the game called "Gormate" (essential if you select the higher difficulties) which will allow auto-generation of health for 20 minutes if you eat 50 or 80 points per second food. Even in Horizon Zero Dawn, you have to take a potion (instantaneous) or manually select slow recovery providing you have collected the herbs for that.

Sure the games I have mentioned do allow for infinite lives but you do have to restart from the last bonfire, lantern or save.

Note: In The Witcher 3 you can get an instantaneous recovery potion but it has limited use and can only be refilled upon resting.

Regarding your second comment, Frosty, it's worth pointing out that you've set up a system of proof that is all but impossible here.

The system of limited lives and continues is a holdover from when games lived in arcades and served as a tool to generate revenue per play. The games were skewed to be overly challenging, with (upon testing) a significantly lower number of retries than the average needed to see all the content/beat the game. Games were even designed with 'walls' where bosses would break the established rulesets to artificially move the goalpost (and keep people spending). Sure, these old challenging games are fun (and I love them). Still, that fun is intertwined with frustration which is a by-product of the arcade business model.

Today's games have largely moved away from and improved this out-dated method of challenging the player and are largely for the better because of it. Today's challenges come in many forms, but players can select between difficulty options, save points, retries, cheats modes, challenges, gear, and beyond. This is good because it increases personalization and allows gamers to tailor the challenge to their liking. (That is, where game devs allow such changes ~ by no means should this never be expected.)

So the systems have evolved, but it's not accurate to define this as the challenge being removed (which is the inferred meaning of your complaint, "there's no game-over anymore"). The key takeaway in this game design evolution is that designers have altered game design to retain challenge while respecting players' time.

It's almost cliche at this point, but look at Dark souls ~ would you define this game as not challenging? The beauty of Dark Souls' design is that it modernized the arcade formula by leaning hard into the overall challenge but creating a method to let players experience loss in a meaningful way. In the arcade days, that loss was money and time, but players would return to achieve the sense of mastery and accomplishment gained by eventually overcoming the game. In Dark Souls, that same mastery (as arcades) ultimately needs to be achieved; the ability to endlessly continue after failure is a prerequisite to gaining the required skill as a player. [1/2]

Back to my original point, however, of the fruitless task you proposed asking for an example that "isn't an indie retro throwback". With this qualifier you are showing that you miss the point somewhat ~ you are automatically invalidating the only valid responses.

To clarify: the task is almost impossible to achieve because the design systems have become (generally) out-dated and obsolete (and are now found almost exclusively in the disqualified category). As explained above, there are more recent systems that offer similar reward structures but with far fewer cons than associated with arcade-style design. Design practices evolved, bringing good design (for at-home consumers) to the forefront and eliminating practices that were envisaged to keep people spending. (Sure, freemium then took over, but that's a whole other thing that we could discuss for hours!). Even Dark Souls 1 gets a hard time by today's standards for wasting player time – if continues were finite, can you imagine how many players would ever decide to make it beyond Orstein and Smough?

On a personal note~ I adore retro arcade games! In 2019 I bought Xeno Crisis (a modern game explicitly built for the Genesis handheld, if you can believe it!), and after 30+ hours' play, I've yet to beat it (due to having like 3 continues). My bestie and I get together a couple of times a year to pull an all-nighter and beat the game, but, haven't managed yet. I love it nonetheless. Similarly, Housmarque's Nex Machina is one of my favs too ~ but had they not included an option to have 100 continues vs 5, I might never have made it past the second stage.

I propose that both of the above titles be eligible for consideration as examples of what you were wanting. Still, of course, you'll be the judge of that ;)

Ultimately, I feel that all games are valid, as are all design choices. The market, however, will decide what becomes and what stays popular. It so happens that the market for people willing to pay full price for a game and see <25% of it, is small. [2/2]

Next thing youre gonna tell me that Press Start is better than Insert Coin.

I don't mind GTA's Wasted when another player kills you

I'm waiting for "You're a loser"

I missed my Gran Turismo tell me I FAIL at license tests.
They knew how pushed your buttons.

That day bow bow song in GT4 was hilarious though

Don’t mind me I’m just here for the comments.

I don’t care either way if the game is fun

The batman arkham games did the ole game over best imo.

Most computer games back in the day were inspired by coin-ops. Those games were so hard and designed to empty your wallet. While I do love myself a good ol' coin up, the result was that very few people actually got to experience the full game (I rarely got past the first few levels) without cheating.

10 Most Disgusting Enemies in Games

A year after Elden Ring changed everything, there’s never been a better time to return to Dark Souls

Fromsoftware Needs to do Better with Its Cooperative Gameplay Systems

Sony: We have not cut PS VR 2 production numbers