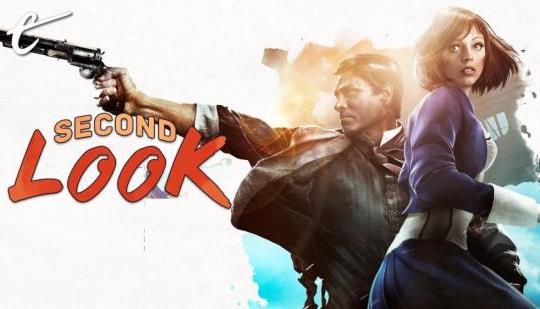 Irrational Games' BioShock Infinite feels like a pretty terrible BioShock game, but it's entertaining anyway when you're swept up in it.

Bioshock Infinite is one of my favorites having a city float in the skies is just as good as a city under water. The DLC has some bugs to it but I enjoyed it. And who is to say that Infinite is Bioshock 3 it could simply be a side story until Bioshock 3 comes out.

Hhhhh obviously not, since it's called Bioshock Infinite

Infinite is just part of the entire Bioshock universe. It doesn't need to be a specific number in the series.

It is a great Bioshock though. And my personal favorite of the series. Just because it isn't in Rapture doesn't make it bad.

The setting is amazing aesthetically, but everything else wasn't very Bioshock. First 2 games can be pretty repetitive gameplay wise, but the world building is something Infinite lacked big time. It's themes were also poorly done and it was all over the place as it kept its generic FPS pace. With that said if Kevin could come back and make the game that he first talked about i would love to see it

So not saying the first two games are on a Deus Ex level, but the combat was 5x less repetitive to Infinite for me. In Bioshock you could tailor your build to be plasmid or weapon, or melee or hacking. You had actual moral choices to make that actually impacted the game (especially in 2). The second game in general has really fun combat, even if the story is lacking.

I never felt those games went as far as they could, but Infinite definitely doesnt. Two weapon limit, no choices, reliance on long cinematics and a linear story.

I have the bioshock collection and I've been meaning to get into it sometime. I just wonder when I'll have the time and if it'll live up to the praise it gets.

Trust me, play them

You and me both. I've started the original Bioshock a couple of times and then get sidelined and forget where I'm at but it was fun when I was playing it. Infinite I bought years ago standalone and played it straight through, I thought it was a fun game with it's own charm, I think you'll like it.

My first real platinum. Played it on the hardest difficulty and multiple times. It was a finely crafted game.

I see it as Bioshock 0

I think thats apparent from the title.

I thought Infinite was amazing. The ending dragged on a bit but I enjoyed it so much. Take 2 kills me by not announcing a continuation.

It’s a great bioshock game. No sequel will ever be as good as the first. It’s an unfair bar to jump.

Infinite was a great game and a solid Bioshock.

Out of all bioshock games it's my favorite gameplay wise. It is a lot of fun to play besides the last battle which is very tedious

Loved it! DLC too.

Ah, the age old "if X is a departure from Y, it's a terrible Y". In a universe where series never deviated from the standard formula, we would still be playing first generation Resident Evil, and there would be no Breath of the Wild. Infinite is, IMHO an excellent game in its own right, and it actually does something excellent for the series: it proves that the potential for a Bioshock game is nearly...infinite (SNS). Locations and gameplay are limited only by the imagination of the devs. Also, I love Rapture, but we had already spent two games there by that point.

I really like Columbia too, and the idea of where the series will go next probably intrigues a lot of us (though it will be a challenge to live up to almost a decade of anticipation). I don't care whether Infinite is the third game or a spinoff, but I'm glad it exists.

Ah, the age old “they don’t like the thing I like, so I’ll pretend their valid criticism is indiscriminate hatred of novel ideas”.

Didn't one of the DLC return to Rapture anyway, so there's a connection right there!
IMHO I thought it was a great game, worthy of the series.

Yeah, two of the episodes were set in Rapture.

Didn't need to be Bioshock 3, it stood on it's own merits and I enjoyed the hell out of it.