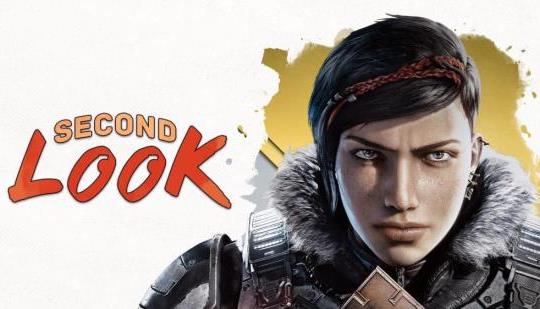 Gears 5 Is an Epic Journey Only AAA Games Can Achieve

In a way only possible with a AAA video game, The Coalition creates an epic journey with personal stakes and human writing in Gears 5.

Many had huge problems with kait. Gears was the rambo of videogames. What it seems is that coalition went the road that many have gonne and put a girl as star. Its not about being mature.. Its about having fun. nobody ever is looking fot this game to get a oscar. Its just fun ripping apart . but in this times....

I actually haven't played the campaign yet. I just pop on to multiplayer here and there.
Judgement was terrible and Gears 4 wasn't much better so they kinda burned me out to the stage I cant find the energy to even start playing this one. I did not like JD, Kait or Del in 4

Many do the same. I udnserstand what you are talking.

So, a woman being the main protagonist offends (you wouldn't frame it this way, but it's politically incorrect for you). Strange.

Original Trilogy Gears wasn't just about having fun and tried (sometimes failing spectacularly) to "get an Oscar". haha https://youtu.be/TYeU2JYAgJ... (2:26)

Not really everybody can have on opinion. And no, a girl being the protagonist of this game doent make any sense. Those vídeo were amazing. I remember them well

When they replace a male protagonist with a female one purely for woke browny points its ridiculous and needs to stop.

Nothing wrong with the games growing up a bit. The problem with Gears 5 in my opinion is the story does not evolve past Kait wanting to find out about her Past. Her identity crisis is solved pretty trivially about half way through the game and so her character becomes a passenger to the plot which sees her going to stop the big bad. Her connection to the locust gives her headaches when it should affect her in a far more profound way.

In God of War for example, getting to the top of the mountain to spread your wife's ashes is what sets the game in motion but the crux of the story is actually not about doing that. The conflict between Kratos and Atreus is what needs to be resolved by the story and it is by the end. It is the centre that holds the entire experience together.

To be fair if Gears was the rambo of video games then the story shouldn't matter anyway. It's always been about ridiculous gameplay. The article isn't about Kait's character treatment, it's more about how amazing the game looks and plays with the next-gen update.

I bought Gears 5 months ago but waited to play until I got Series X. I've only finished the tutorial so far, but damn that game looks fantastic!

I started to play with a friend back then too, but we just got to Act II. Now I think I will restart. His Xbox Series X is about to arrive.

It's been out for 1 year its not a new game it's an old game so why is it being promoted upwards...

what exactly are you trying to say merrin? does it matter if a game is being promoted or not? It's just an article that a writer came up with.

I didn't play it on the XSX but I did on my OGX1 and I found it dull and flat,almost as bad as part 4
I hated the companion bot and those skiff sections

Okay, so I actually asked for a refund on this game and was denied.
My problems were;
1) I was forced to play as Kait
2) I purchased this title as a digital download for full price, because I prefer to buy my games. My friend and co-op partner decided to download on gamepass. He actually received the XP boost bonus with the game while I didn't!

Okay number one.
I applaud The coalition for including Kait as a main, if not the main protagonist in the story. However, being forced to play as a female character is not what I wanted. This is not mysogynisitc or sexist. It's simply I'm a man(pro noun 'He') who prefers to play as a man in this genre of game. My disagreement is about the absence of choice, not the gender. In contrast, I thoroughly enjoyed playing as a lesbian female in 'Life is strange.'

Number two. I paid full price for the game even though I did have gamepass,and feel I was 'punished' for not using gamepass. The result was that my friends character leveled up at twicw the speed. Very unfair, I thought.
Best of all, I only ever purchased Gears to play co-op with my buddy. Other than the first game I haven't really be that bothered.
And finally. I am not and never have been afraid to say what I believe, while I never wish to intentionally offend anyone, neither will I deny my own views.

lol
- you dont like to play with a Woman in a shooter
- fairly enjoyed playing with a lesbian female. Max can go either way so shes not just a "lesbian female"

i hate to say it, but that is quite misogynistic ha and a little sexist, and a tad homophobic haha

That is weird that game pass allowed your friend to level up faster. Definitely wise to take advantage of Game Pass for trying it out first though.

As far as your preference for what gender you like to play, shouldn't matter to anyone. Same folks who would be offended that you didn't want to play as a female would complain about the lack of gender choices when forced to play as male. It is a one-way street for people like that.

I'll take that advice. Thanks.

no offense taken, and of course its ok not wanting to play with a woman in a videogame. but i think you should keep those thoughts to yourself, society wont expect such thoughts. but to be fair, there are alot of people who would just simply trash a game cause of it.

i replied cause it came across as hypocritical and the lesbian female made me laugh xD i believe your not sexist etc. dont worry.

me and my friend tried such a soulless game we were just going through the motions, I wanted to like it you can see they put money into the product but it just was not fun for me.

I'm going to play the campain again once I get the Series X next month.

I felt the ending was kind of abrupt, I was like, “that’s it”? Otherwise had a blast.

Top 35 Best Xbox One Games of All Time

This Humble Bundle Includes Fantastic Games For A Low Price

Splash Damage Is Working On A New Original Sci-Fi Game