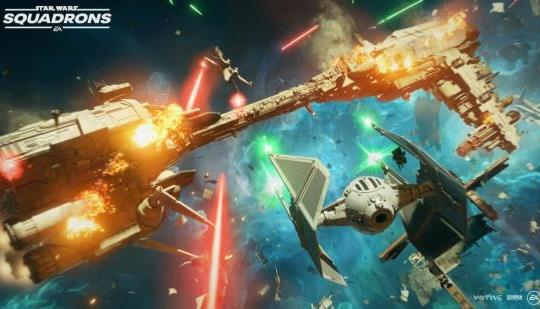 Star Wars: Squadrons: How the Mosquito Strategy is ruining multiplayer

Emergent strategy has always been a part of competitive multiplayer gaming. This is not an inherently bad thing and can help to keep games fresh and interesting.

However, occasionally a strategy can damage the spirit of the game as well as the overall enjoyment, particularly for new players. The Mosquito Strategy in Star Wars Squadrons is one of those strategies.

"You fly under an Alliance frigate’s shields and stop directly next to the hull."
And you should be dead after three seconds, if game wasn't just an arcade crap for kids.

Have you even played this? I've been playing flight simulators since the original X-Wing, TIE Fighter, and X-Wing vs TIE Fighter. And I can say this game is the next best thing to those. But its literally impossible to make a flight sim as in depth as those on console because those games used almost every single button on the keyboard and joystick. There aren't enough buttons on a controller to do that.

Doed this game have its share of small issues? Yes. This being one of them. Also, in campaign mode the AI struggles when flying in areas with a lot of debris, ships, or enclosed areas. It struggles with running into things and maneuvering. But that is actually pretty rare.

Honestly this game is pretty great. It may not be as in depth as the oldschool hardcore PC flight sims. But its definitely not just some dumbed down flight sim for kids either.

Elite dangerous is in direct contrast with your claim controllers do not have enough buttons. They do. It just takes smart control design.

Ubisoft shuts down servers for over 90 legacy games

Most anticipated strategy & tactics games in 2022

PS Plus Not Required in Free Online Multiplayer Weekend for PS5, PS4 Games