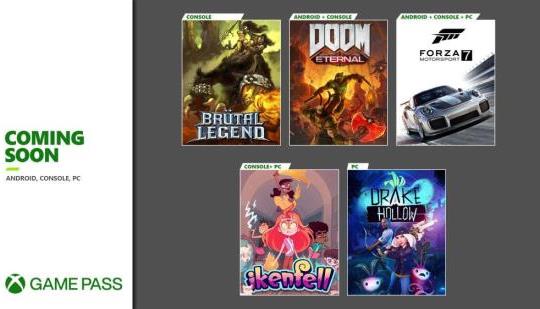 Can it get any better? Ridiculous value.

I hope it get better too. I unsubscribed from gamepass PC with the low quality of games coming and the price hike, it was an easy choice. I will probably resubscribe in 2022 when Series X games are released. Like EasilyTheBest said, for 10$ per month the value is not there.

Eh it would be way better if the games didn’t come and go so much. The discount is a joke when they leave. Also most of these games are ones I’ve already played and are done with.

There's a lot to love, do not get me wrong. At $5 (with occasional $1 buy-ins), it has been an incredible value on the PC side. It was always annoying (becoming tiresome) to see "coming to Game Pass!" for a game I'm interested in, but see it skips out on PC. I mean, Doom Eternal isn't coming to PC, but it is coming to "Android" (xCloud)? That seems insane.

When it was $5, you understand you are paying less for a somewhat "lesser" product (at least lesser parity). Now at $10, you're paying the same as a console GP member and getting less value. And given they own Zenimax now, I can't understand how they can't get that on both services. And sure, PC GP players get Drake Hollow while console players don't, but uh...that ain't exactly a fair trade in my eyes lol.

I thought Doom Eternal was coming to GamePass PC... but in December.

@agnosticgamer I did at least read, after the fact, that it was coming "later in 2020" to PC in another announcement, but they don't mention it on this article. But the fact that games I was initially excited about like Journey to the Savage Planet and Nier: Automata both ending up being console only and never having arrived on PC Game Pass kind of pointed me towards the belief that if it isn't day and date, one platform or the other isn't getting it. And PC is missing out on some others like Monster Hunter: Worlds, ESO expansions, Outer Wilds, Remnant FtA, Destiny 2 expansions, not to mention games that are console only like Kingdom Hearts or 360 games...

It's just not quite as good a value on the PC side, which is a bummer. I was hoping MS was going to hold off price parity until they got all the releases lining up day and date, but I guess that's not gonna happen - even on big titles, and even with titles they now own lol.

And I was wrong, console already had Drake Hollow, so PC gets no bone thrown to it this month :-p.

I’ve got drake hollow on console

Tbh Xbox. Gamepass for pc is sounding excellent at thee moment it doesn't have as many games as console version due to backward compatibility but it's still Meg decent

Its only a must have real good deal if you own a xbox console in my opinion. If you don't own a xbox its less of a deal

Gamepass Ultimate is even better value, as you get the lot!!!

If you have not played Brutal Legend, definitely give it a try! I played it on 360 and PS3. Tons of fun!

I really liked brutal legend and the spundtrack is amazing but about halfway thru when the gameplay changes up i stopped playing. I will give it another go now though.

I remember just riding in the car to nowhere everytime the song rock of ages played lol.

Strange that Forza 7 wouldn't already be on there

Doom, nice call, going to give it a go.