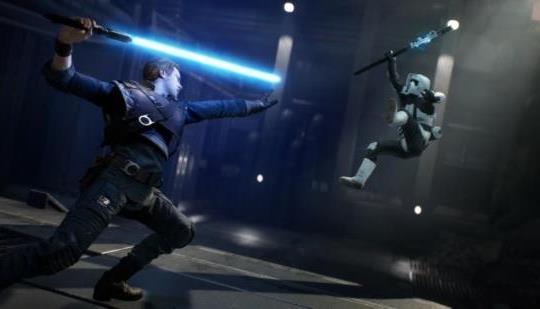 Fallen Order Did What the Star Wars Sequel Trilogy Didn’t

Dean Freeman writes: "These should be halcyon days for Star Wars fans, but fandom in the modern world can be poisonous and self-destructive. There has been a Star Wars cinema release every year since 2015, with The Mandalorian and the animated series adding to that, alongside the comics and novels.

Ten years ago I’d have loved picking apart the sequel trilogy, for all its flaws, mistakes and missed opportunities. I have the ammunition in my head – I know the old expanded universe – but I just don’t have the need to fire it off. At the time I enjoyed Episodes 7-9 for what they were. I embraced the wackiness of ROTS and walked away having had a happy enough cinema experience.

But the long lingering sense of it not being quite right, one I’d pushed down so as to not associate myself with the histrionics of the internet, did finally re-emerge over the last few months, as I worked my way through Star Wars: Fallen Order."

Adhttps://n4g.com/General/Sponsored/arise
- Comments (7)+ Comments (7)
TopNewestOldest
The story is too old to be commented.

this game was so boring, i couldn't get passed 10 hours. Idky people compare it to darksouls or sekiro

Because the combat has similar elements. You'd know that if you had actually played the game.

Except I played it, what would be the point of lying? It just wasn't good. I played on hard amd it was meh. The skill tree was meh, the puzzles were boring slowdown spinning fan cliche, the armor all looked the same.

A better scifi souls like is surge, the storm troopers do not make me worry at all lol. Waste of 20$

My favorite part was hitting a stormtrooper in the back with a lightsaber and then he turns around and attacks me. I remember seeing that in all Star Wars movies.

I’m slowly working my way through it. It’s decent. The combat is not as tight as soulsborne games. The dark sister fights are pretty good.

I enjoyed the game and I’m not a Star Wars fan either never could get into any of the movies .

Well after the recent films and 2 other SW games that both had their own issues, this was always going to be a win. Its single player, not MT'd to death, had a reasonable story and actually felt complete on release.
Not the best SW game imo, but a decent 8/10 from me