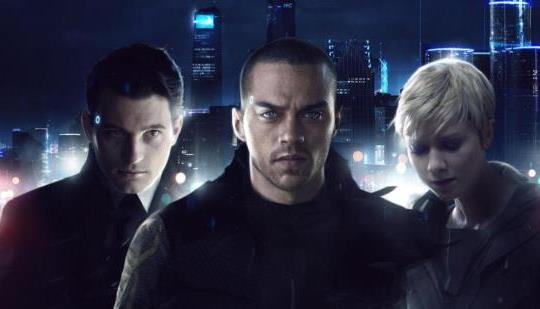 Of all of the games I have played, Detroit: Become Human tackles so many issues in a way that is so accessible for gamers to interact with, especially given that it nearly mirrors the unrest in the world today as people come together to protest against racism. It’s just so unfortunate that it’s the product of Quantic Dream.

Adhttps://www.releases.com/?utm_source=n4g&utm_medium=native&utm_campaign=c1
- Comments (33)+ Comments (33)
TopNewestOldest
Expand all
The story is too old to be commented.

i think they know, i heard they made it.

I was going to say that, lol.

Lol, for real. I absolutely loved Quantic Dreams work on this game! My personal favorite game they’ve made.

Special nod to Heavy Rain...What an emotional ride that game was.

1.) That's in the description
2.) The point being made doesn't conflict with that fact either. Another example: "George Lucas doesn't understand what made Star Wars so good." It's not hard to find that kind of response from prequel-haters.

It's also funny how the other QD co-founder (not David Cage) was quick to plant their flag with these BLM protests and tie Detroit's overall messaging with what's occurring right now. Kinda hurts the "not a political game" comfort food previously bandied about.

I don't think that was the issue, though. The issue with Detroit was mostly: "you can't tackle X themes/subjects without digging deeper into them", to which I say: fallacy. Sometimes even the slightest mention of a particular subject is enough to make a person think deeply for him or herself rather than being preachy about it.

But that's sort of the problem: the issue depends on who you ask now. The other QD co-founder is now utilizing Detroit's messages with the BLM protests while David Cage wanted it to "not have something to say" before its release.

-"Sometimes even the slightest mention of a particular subject is enough to make a person think deeply for him or herself rather than being preachy about it."

Sure, subtle incorporation can be more beneficial in today's age; however, I don't think that's what I (or most others) took issue with Detroit. Pretty much everything outside of the detective storyline hit a different note: themes/subjects about as deep as a puddle AND was incredibly preachy about it. It felt like the creative equivalent of David Cage congratulating himself with "what if...(civil rights/etc.) but with androids" ad nauseum.

If the creator didn't want the story to be allegorical, which I felt it heavily was regardless of what Cage said he wanted, it doesn't mean that should it's messages be relevant to something else going on, that it shouldn't be cited as an example of it.

Although, in this case, I feel it maybe is not really very appropriate, and also find the relevant message of the game being stretched to try and make it part of BLM. I feel that may be a rather deep topic of conversation though, and I'm tired and maybe am not thinking it through as much as I should.

I think they said that so politically sensitive people who dont like to see anything They dont agree with, would still buy the game.

In a sense they weren't lying either. Some things are societal, but politicians make them political. Justice for everyone shouldn't be a political issue, it is a societal one that has been politicized.

I think I'll have to--respectfully--disagree/cha llenge the point you're both putting across.

But aren't you now running into the creative equivalent of having your cake and eating it too? If your initial (but also muddled) assessment of your own artistic work is that it really says nothing except "respect androids or something" despite real-world events mixed in, why then do you get to chime in on your work discussing real-world events when it's convenient? Perhaps I'm looking at this harshly, but I think this harms QD's reputation as artists and taking responsibility for your art. I'm focusing on the executive higher-ups, not their great visual/audio designers and such.

Sure. Like it was more marketing ploy to ease peoples' worries about it being preachy (which I think it still was). But then that also throws a wrench into (some of) the gaming community's worldview about politics being "dragged into" games. QD was considered an example of an artistic team not trying to do that with Detroit...only for its co-founder to instantly disrupt that narrative for the potential of netting the game temporary recognition (and maybe more sales). Considering how many gaming brands have latched onto the BLM as well, it's not hard to make a nuanced narrative suggesting whatever companies have said about this topic in the past was with the sole intent of maximizing profits based the way cultural winds blew.

I don't really follow your delineation here. In its current form, the notion of justice communicates a lot of political overtones based on societal structures we've established, not by a politician's whims. When people think of "justice," we're typically considering remediation through legal means (i.e. the state).

Totally underrated game. One of my favorites this gen. Can’t wait to see what they are working on next

I’m glad to hear you enjoyed it too. I mean so anxious to see what they’ll be able to accomplish on next gen hardware. I’d love to see “The Dark Sorcerer” made into an actual game. Not sure how you’d go about it, but why not? Lol.

Ladies and gentlemen, we finally have conclusive evidence that opinion pieces have no place on N4G.

ChickenOfTheCaveMan971d ago (Edited 971d ago )

It's not because it is really about android that the core can't an analogy for racism or sexism. Just like the first X-Men trilogy was about mutants but with a strong analogy for homophobia. Maybe Cage wasn't ready to paint it as one issue thing, and like I said some might take it as a racism minded game, but the point for the game to be based on a sexism issue could be made. It's about inequality of a minority that used to be taught not to think and just do, creating a movement, how to create that movement and the perception of the majority of that movement, and deal with the consequences. It can be applied to so many situations that I think it was right for QD to not make it a one issue thing. I think the writer of this article was very close minded about the wide array of subjects this game was made for.

They randomly picked words from the internet to write the story.

I am so glad they made the Kara tech demo into an actual game. First time I saw that tech demo I wanted it to be a game and that is Detroit great game.

The comments here seem like no one actually read the article. It basically says QD made a great game with Detroit, explains that QD at first said that Detroit wasn't meant to be political, then after the recent events QD is plugging Detroit as a parallel to what is happening now, and people are shaming them for using the current situation to plug the game, and then QD is trying to awkwardly redact it.

So the article does make sense. QD is going back and forth, contradicting themselves, and being accused of being opportunistic.
But QD was the studio that addressed these issues well before the situation we are in now. QD wasn't afraid to bring it to light as it was happening. Whereas now everyone else in the media is just starting to react. QD was way ahead of the curve and they are being punished for it. Not fair in my opinion.

QD did it the right way, naughty dog is driving theirs the wrong way

I haven't been spoiled on TLOU2. With only 2 weeks left I'm not going to change that. I personally owe it to Naughty Dog to play through it without any prejudice because they have given me one of the best gaming experiences of all time in TLOU1.

But I am extremely upset there is no Factions. So if anything that is already points marked down for me.

So right now I'm thinking the subtraction of Factions will not be made up for in the story of TLOU 2 based off what I've heard. So in a weird way I am already let down.

Doesn't make a lot of sense to acknowledge all the themes that the game deals with and then claim that they somehow fluked them all and had no idea what they were doing. Just because Cage said it's "mostly a game about androids".

Stay off the internet people. It's making you dumber.

An article about how great the game is and themes explored followed up by and dismissed by twitter drama. What a ridiculous article written by an emotional reactionary. Making a mistake doesn't undo your good work, but no, let's rage and cancel culture everything.