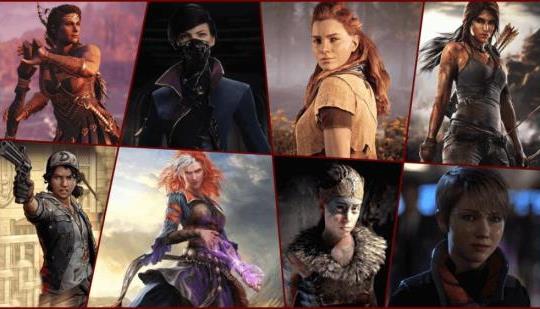 Best Female Video Game Characters That Inspire Us All

Aloy of Horizon Zero Dawn
What a very inspiring character and story.

Aloy is the best. Such a well written character!

Bayonetta is the best. She has the best ass in gaming.

Aloy is ugly.
Neither showed any boobs or ass

Yes we know you are

takes a virgin to call another a virgin, and aloy is not the prettiest to say the least

I like big ass because women with big ass have stronger sexual performance and recreational skills.

Well I don’t disagree with you there in terms of attractiveness but HZD is a great game that shouldn’t be ignored despite its boring MC.

Who cares if she's pretty? Do you dweebs only enjoy a female character if she's super model attractive because you can't get pu$$y in real life?

The new Claire Redfield is an awesome female character as well.

Some of these characters are so old I don't know when l who they are. How is Ellie not on this list.

Kasumi from Dead or Alive, she have great assets.

When you don't have Ellie on a best female characters list, it invalidates it. She's one of the best, most well written characters in video games. But okay.

Ellie is not on the list because they only wrote about female protagonists, and even though sometimes you play as Ellie (not talking about the Left Behind DLC), the main character is Joel.

And yet, you got more from her brief play time in TLOU, than you got from the new Lara in a trilogy of games.

Title says best female video game characters, not best avatars that you play. Ellie is one of the best characters ever written for video games, and was more real than any other character in this list.

Honestly, don't think Lara should be in that list. As a character she's actually just kinda annoying, all she does is talk with exasperated breath when looking at ruins, scream "shit shit shit" when things start to fall apart, and whine/scream at people when things aren't going her way, then says "ok, here we go" when they are. WOW GREAT CHARACTER! her friend, Jonah is a better character than Lara.

Like seriously what is a single moment when her personality shines through and become something memorable? out of all 3 games only thing that comes to mind is when she pulls her shit together and goes on the offensive in the final act of the first game in the new trilogy, and is just tired of being a victim and instead dabbles in being a badass. but none of the other games seem to have anything like that really.