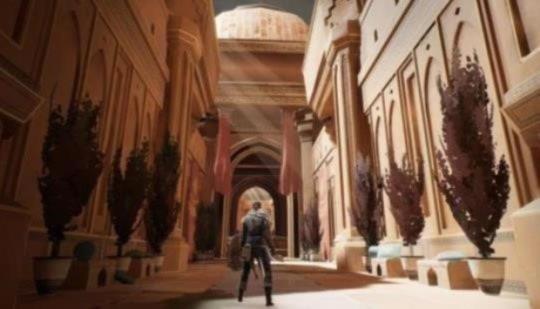 DSOGaming writes: "Ashen is a new action adventure RPG that is heavily inspired by Dark Souls. In fact, this is a complete copycat of FromSoftware’s title, albeit it features an open-world environment and a different visual style. Since the game has already been released, we’ve decided to capture some 4K screenshots from it."

Adhttps://www.youtube.com/watch?v=_iUAHlmkvuE&feature=youtu.be
- Comments (7)+ Comments (7)
TopNewestOldest
The story is too old to be commented.

Open world ? I like the dungeon crawling in Dark Souls . Cartoonish style ? Bleh . I don’t think it will be anything near Souls games . Is there a stupid amount of save/spawn spots because it’s open world or is it not that difficult or is it a lot of empty area with nothing to fight? Open world and Dark Souls doesn’t sound like the best combination to me and then add cartoony style (I hate it for every game just about) it sounds like a turd .

so you clearly haven't played the game and don't know anything about it lol. I am a huge souls fan and this game is the best 'souls like game I have played outside the from software games. the lighting and visuals are stunning. with regards to the map it is very similar to dark souls in that there're large interconnected areas. it's certainly not as hard as dark souls due to the co-op partner but its extremely challenging if you go at it solo. there're enemies everywhere just like dark souls. if you don't like the visuals that's fair but anybody who like dark souls will enjoy this and it certainly isn't a turd . if you did pick it up would you play on pc or xbox? Just for you information all the screens in the article are from the first 30min of the game. each area in the game has a different feel

Its a decent game so far. I am about 1 hour in. I am playing it on X1X, its on Games Pass, already. I did not like the visuals at first, but they already grew on me.

@iplay1up2
The visuals are definitely different. I think the lighting and atmosphere in the caves are incredible. I wasn't a fan of the second area but after that there some amazing locations and vistas.

Not a fan of the Souls games but damn those games are gorgeous to look at... THIS? my word, they strip anything that I could like about these sorts of games... bland, blocky, edgy graphics... easily an early PS3 title tech-wise... physics I don't know but darn it shows nothing special, BloodBorne remains the toppest Souls game ever...

Again, comparison-wise, SOT, SOD2, Ashen and upcoming Ori are HARDLY tech shows, esp. speaking of how xb1x remains empty of an exclusive that could show its bells and whistles... and much inline with SOT or SOD2, this isn't gonna sell well... just a bland offering not attracting audience... another casual in a foray :(

DAMN, WITH GAMEPASS, THESE XB1 GAMES SHOULD BE STANDING FACE TO FACE WITH SPIDERMANS OR KRATOS OF WARS... MUST BE THE LACK OF APPEAL IN THESE XB1 EXCLUSIVES!!!

This is alright so far. Not a fan of the souls games but I played bloodborne and the surge from that genre and loved it enough to beat it. I’ve been playing ashen for a couple of hours now and beat the first shadow boss. It’s pretty good so far. I’m probably gonna see this though. It’s a good podcast / Netflix game like bloodborne and surge.

Five Games like Demon's Souls to Satisfy That Soulslike Craving

Bored of Dark Souls? These are the best Souls-like games on Xbox One

Xbox Deals With Gold and Spotlight Sale Discounts: 21st-27th May 2019