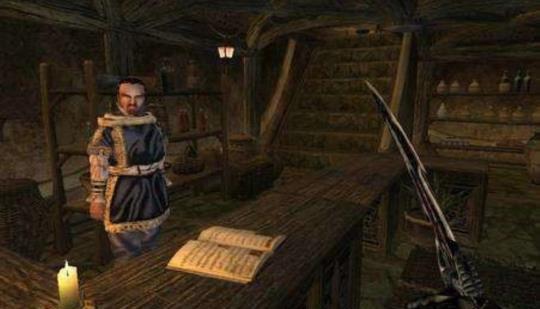 Morrowind Gets Impressive Boost From Xbox One X

The Xbox One backwards compatibility combined with performance boosts does some much-deserved justice to one of the least optimized console Elder Scrolls games.

Wish Bethesda released this digitally on ps3 and updated with trophies. But of course they've shown to be lazy for awhile now. They could do a HD version for current gen as well

Blame Sony & not Bethesda for this one

Why would I blame Sony? They released all the dlc digitally for IV, fallout 3 and new Vegas, but not the game. Trophies came out after IV released, that's on Bethesda if they want to patch in an update. Did I miss something?

Please explain why you disagree because you said nothing....

Fallout 4 used the same engine as the outdated mess from last gen. Skyrim is being recycled to death, we all want VI but they say "no thanks, take this instead"

Bethesda is likely to be working on a new engine, not lazy. Since they usually debut a new Elder Scrolls on a new engine, I'm assuming that's why we're not getting 6 right now. I'm curious to see what they've got cooking for E3 nonetheless.

Contribute to the original subject before side tracking. Thanks

I was talking about Oblivion, lol my bad

Same should be said about people claiming God of War isn't a one shot game. But I'm guessing you won't agree with that Kevnb

Not about being lazy, it’s about money. Backwards compatibility means the game can already run on Xbox one. The Xbox one x can by default run any game with as much power as it has (doesn’t use or need a boost mode like PS4 pro). All Bethesda would have to do is update textures and uncap the Framerate and now you have basically a remaster for free. You should blame Sony because the One X was just designed better with things like this in mind. Bethesda would have to rebuild the entire game to run on PS4. PS3 architecture was completely different than pc and previous Xbox hardware which makes backward compatibility nearly impossible unless you have the brute force to emulate ps3 architecture on top of running PS4 system architecture. The pro just can’t do that.

What I'm asking for requires nothing from sony, why are you even talking about them? I want Bethesda to have a digital release on ps3 but for whatever reason they didn't although you can download the dlc. And there's no trophy support. No bc support on Sony's end would fix the two issues I'm talking about.

what are you talking about InTheZoneAC? Morrowind isn't on playstation consoles at all.

I think this “impossible” emulation of the PS3 is a load of BS. If they hired exceptional software engineers they’d be able to figure it, but the thing is BC is not a priority for Sony. I mean they don’t even have software emulation for the PSone or PS2 which were based on a 33mhz and 299 MHz RISC CPU respectively.

@343_Guilty_Spark actually hackers have exposed ps2 classics are just games running on emulators on both ps3 and ps4, they have been able to package many ps2 iso files and get them working with hacks. Sony simply doesn't want to give bc away.

When was Morrowind on PS3??

Confused it with Oblivion, I apologize.

I disagree because you’re categorizing a company of hundreds of people that have made some of the best games ever as “lazy”, simply because they didn’t add trophy support to one of their old games.

“Lazy” means they are screwing around and not doing anything.

They are working hard on a lot of things, just because you don’t get everything you want doesn’t make them lazy.

I’m sorry but I see that word tossed around all the time and it’s nonsense and unfair to all the people that work long hours to make games for you to play.

Xbox is hitting homeruns with these enhanced games. They're not enough reason to invest in an XOX, but it does make me wonder why PlayStation isn't doing the same with the Pro.

Probably because their money is tied up in releasing new blockbuster games. They've got a killer lineup of brand new 1st party exclusives coming out this year. They have no need to delve into enhancing extremely old games in order to try and justify people buying their console. I'm not opposed to BC on PS4. But they just don't have any need to do it right now or for the foreseeable future. Sony is hands down owning Microsoft on the exclusives front.

So Sony is driven by profits, they follow the money and "this is for the gamer" is just marketing rhetoric?

So if MS starts pumping out 1st games then what? We can pretend that what they're doing isn't important but if exclusives and I mean good exclusives) do come I see a some hope for MS to finally stand out again.

Maybe. But for those of us who has bought a "premium console" like the Pro and XOX, more enhanced games, not just past titles, but current ones is part of what we spent more money for. Right now, I feel like Xbox is delivering moreso than PlayStation in this area. Fortnite, for example, looks way better on XOX. PlayStation having great exclusives isn't a pass on being lazy enhancing games for a more premium experience with the Pro.

@Amstrad lol Really dude? Grow up. Of course they’re driven by money, just like every other industry in existence. That doesn’t mean that they’re not making far better use of their funds though. Sony obviously needs to make to money to be for the players, and they’ve made many great titles that prove that they’re not being slouches. Kind of inronic, when you consider they have so much less money than a particular other company that doesn’t seem to want to do anything besides release $10 GaaS titles once in a while.

@Blakhoode Yes, the console that's a year newer and $100 more expensive can play games a bit better. Shocking, I know.

You're looking at this from a console war perspective and of course you know this. This is 100% you being what most call a corporate slave. Instead of looking at it from the customer(which is what you are) point of view you are solely looking at it like you're employed by Sony and defending them like you're an executive of the company. You're just not thinking very clearly but you wouldn't be if you're so caught up in the "console war"(which is hilarious)

Thats the reality, but for many they havent anything else to grab on. Making amazing games takes years and years and Microsoft just dont have the studios to make them, because of the Forza, halo and Gears franchises over and over and over. It takes to much resources.

So now we are reading all this news with amazing, fantastic, huge upgrades on games that are old and done. Zero impact. Is cool feature, but gamers spend 500 to see amazing brand new FULL games and i have many doubts if the full power of the X will ever be used this gen to create something really special.

For me the X is much more then a upgrade and they should have gone a jump start the next gen, because the X is like 4 or 5 times more powerfull, reach 4k, much better ram set up then the original Xbox. The Xbox One is stoping the X to reach much higher grounds.

@Oneshot Generally yeah. I buy one game every few months to every 6 months, if not less often. On average I buy maybe 3-5 games a year. I don't have hundreds and hundreds of dollars a year to spend on games. Or dozens of hours a week to play. I get 2-3 nights a week for 3-4 hours tops. It's called being an adult and a parent.

Why are you being so childish? What's wrong with you?

Wait.... you where first to comment on Bethesda being lazy for not remaking an old game in hd?!

Probably because it's not something that most people really care about, would be my guess. I think if it were, you'd see it reflected in console sales.

They can't emulate PS3 games on a PS4 because of technical architecture reasons. Xbox 360 doesn't have the same restriction. They've brought over some PS2 games but they take a little bit of work (like adding achievements) and they probably don't sell well enough to make it very profitable for them.

Wish sony wouldn't charge for BC either.

So does a lot of PS owners...they just don't want to admit it at present...

Game did not age well

Runs 60fps can see more then 10 feet out now and was cleaned up dramatically. Aged fine to me 🤷🏻‍♂️

That may be ok for you, but I'm disappointed by the aspect ratio on OG Xbox titles. Letterbox sucks in a 16:9 world. Not to mention the fog, low AI count, poor textures, etc.... Red Dead, Gears 2&3, and Fallout3 look awesome in 4k, but I think the dropoff after the PS360 era is substantial enough this makes the case for remakes on consoles. No doubt I'm grateful for Morrowind and Conker ports, let alone enhanced, but Bethesda (notice I'm not blaming MS) could've coasted this entire gen on Skyrim and Morrowind port/remakes while creating a new engine and a new ES game for PS5 and nXtBox. Parent company Zenimax has made some good decisions regarding their MMO and 3rd party publishing deals, so money necessarily isn't the issue. Skyrim has sold 5 million on 8th gen systems so far, and I know the remake would easily sell that too given it never appeared on PS consoles.

My long-winded bottom line: Morrowind deserves a new facelift since it IS the best ES. It could bridge the gap till a new ES game with a new engine drops. No new engine = no buy

You're disappointed that Xbox games look like Xbox games? If they tried to force widescreen on most titles, it would break them in many ways. Take GameCube games on Wii U for example. Sure, forced widescreen looks great but the game doesn't know what to do half the time and things appear out of whack.

My first Elder Scrolls was Skyrim, so I might just try out this and Oblivion.

I must say, in my opinion, those two were much better than skyrim.

Oblivion and Morrowind was soo much better than skyrim

i can see many folks who like Skyrim hating Morrowind, but they are wrong.

My favorite of the series, afraid to revisit it though since it might ruin my memories haha

I was told that this game would look like ass on a 4K TV, and that I should be playing it on a 480p TV to get the best results...this cant be right!

Its an emulator people thats what they do its a program

An Artist Has Designed A Free, Printable Map Of Morrowind In Multiple Languages

Games That Changed Our Lives: The Freedom of ‘Morrowind’