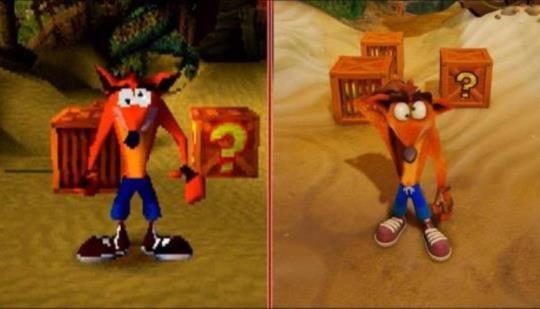 Many decades have passed within the ever-evolving industry of games, with many classic experiences being left in the shadows of the current generation. Fortunately, the developers of these classics do not overlook the wants of the fans and take away precious time to reinvigorate classics within the industry. Remasters, or remakes, have flourished recently within the gaming scene, letting gamers re-experience their most beloved titles. Losing the inventive beauty of the original titles is not something one should worry about. As long as a game has a large enough fanbase, developers are likely to remaster it, whether it be a quick cash grab, or to test the waters for a new entry.

Persona is a weird one on all accounts of the series, since they weren't really... I mean FES added a ton, but it was on the same console. And I wouldn't say the portable versions are remasters, per se, although Golden looks better on Vita than the PS2.

Dafuq is Crash Bandicoot: N-Sane Trilogy doing in the thumbnail? That’s a remake, not a remaster. It was built from the ground up, not taking the same game and uprezzing it.

These journalists really need to know the difference between a remake and a remaster before writing such articles. They’re not interchangeable terms.

Have you actually bothered to read a paragraph of the article? Or are you gonna jump into conclusions without putting any thoughts or reading into? Sounds like the latter. The article clearly states that there is a confusion between remakes and remasters. But you're too blind to read so.

I’ve read the article before making that comment and I still stand by it.

This article also includes Kingdom Hearts: Final Mix, which can’t even be considered a remaster since it’s on the same console the original game was on. It’s a rerelease that shouldn’t be on this list unless you’re specifically talking about the KH1.5 HD Collection.

If you’re going to include remakes & remasters, why is a rerelease on here as well? Might as well have RE5: Gold Edition there as well.

I think your throwing a hissy fit over something really plain. Also "Intertwining between the fantastical worlds of Final Fantasy and the wonderful worlds of Disney comes the beloved childhood adventure through everyone’s favorite locales. Kingdom Hearts Final Mix, though only exclusive to the Japanese audience, was released by Square Enix within Kingdom Hearts HD 1.5 Remix collection, improving the classic and cementing its legacy within the gaming industry."

So what were you saying? No offense dude.

Remasters can easily be considered re-releases because the game at its core is the same with visual or technical improvements that's being updated and re-released at a new price and called a remaster.

Of course remasters are rereleases, but not all releases are remasters especially when it’s on the same platform.

A remaster is when a game gets released on a different more powerful platform with uprezzed visuals, which doesn’t apply to Kingdom Hearts: Final Mix.

Yes I know you mentioned KH1.5 in the article, but you still have KH: FM listed as its own example rather than the collection it’s a part.

It actually does have uprezzed visuals. Even compared to running it at the same resolution in PCSX2, there are improvements to the visuals. Plus the PS4 version runs in 60 fps compared to the PS2 version so it is an improvement. HD textures + higher fps and resolution = remaster. You could argue that the PS2 version was 60 fps but if it was, it was a forced 60 fps which made it more choppy unlike the remaster which is much smoother

I know KH1.5 has uprezzed visuals.

However it’s Kingdom Hearts: Final Mix on PS2 that’s actually being listed as an example of a remaster in this article.

still need to pick up crash ...

Persona 3 Still Doesn’t Have The Modern Release It Deserves