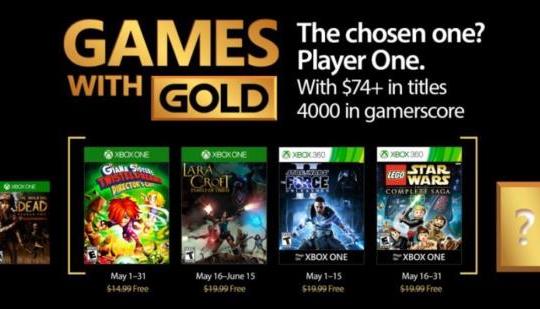 Are the free Xbox Games With Gold titles for May 2017 any good?

Neil writes "No matter what you may think of the Xbox Games With Gold scheme, the promise of free games each and every month, for both Xbox One and Xbox 360 owners, is something which cannot be ignored. Sometimes the masses love the offerings, whilst other months pass by with the community split over what is, and what isn't, worth the hassle.

For May 2017, the Xbox Games With Gold scheme is delivering four more titles for absolutely nothing. But even with the obvious Star Wars and May the 4th relationship, does that mean it's a decent month?"

Giana Sisters best game of the month no doubt

That isn't saying much though. Lately GwG has been good, but May is not a good month.

Strange Tyler, I would think you would be all over Giana Sisters, seeing as how you get giddy over other indie games that appear on PS4.

It's funny bc i get denigrated yet the first three replies either elude to PS4 or outright mention it and the first two replies (which includes yours) are insinuating that PS Plus is worse than GwG and/or PS Plus just bad in general.

So, brokasfawk is implying that PS Plus has a "shitty" lineup 11 out of 12 months. No, that actually doesn't sound familiar. Considering PS Plus has had back to back great months (September, October) in the past 12 it basically renders your statement false. We can argue other months, but you can not argue that September 2016 and October 2016 were bad months bc they were great.

JasonKCK and brokasfawk, I honestly think the PS4 PS Plus games this month compare favorably to the xb1 GwG games.

Really? I get excited for games i am interested in, not every indie interests me. I actually enjoy AAAs and indies, it's silly to assume since i like SOME indies that i should like ALL indies. Giana Sisters has been pretty cheap on PSN and it's been out for years, but i haven't bought it bc it doesn't interest me. The premise and art style do not appeal to me. Temple of Osiris was okay, we got it PS Plus a while ago.

It's a pretty good month. I don't own any of these games. Been dying to play Lego Star Wars. Since GWG gave us the first SW: The Force Unleash a few months ago, it's a nice welcome to get the sequel in May.

Dying to play a game that is relatively cheap and has been out forever. If you were that excited you could've easily bought it, just sayin.

In the grand reality of the situation this just isn't a great month, not on xb1 at least. Of course certain ppl will like it, but considering how ppl seem to boast about AAAs on GwG i'm surprised that you guys are so stoked for this xb1 lineup. The xb1 games just aren't splash games at all. Giana Sisters? Ppl would kill this lineup on PS Plus.

@IamTylerDurden1
You have no clue what you're talking about my little troll. The game was still selling for like $30-$35 and I wasn't paying that for a lego game. It's FREE now. All 4 games are actually decent games. Can't say the same for those Indie games on PSPlus though. Go to that article and see my post.

I'm a troll bc i'm pointing out that this isn't a great month for GwG? Right, but u are totally impartial... I also don't use sophomoric insults the way u do, very classy "my little troll". I came on here to see what the GwG lineup is, i felt it was a down month for the xb1 lineup, and i felt the need to defend myself from ppl wolf packing me. How is that trolling.

I don't try to be first in every xb1 article like the Moldy's of the world do in Sony articles. I don't simply leave empty comments bashing a company or person. Tbh, i felt as though u were overstating how badly u want an old Lego game on 360. Any of the Lego Star Wars games can be had for cheap and the complete saga is 19.99 new, not $30. It still doesn't explain why u didn't buy a Lego Star Wars game on 360 if u wanted it that bad, sure it's "Free" now but how would you've known it was going to be free?

Having never played the Force Unleashed games, I'll take it. And, I'll try out all the others, too. Can't complain about free..

Agreed. Never played the second star wars game so perfect for me .
I don't look at gwg as a good or bad thing. Most of the time I download so I have a chance to play the games I wouldn't have bought in the first place but was slightly interested in

LEGO star wars games are pretty good too. Download it and wait for a dry period if your not that interested. The Lara Croft game is good too.

I don't even own an Xbone and I can say I'd be happy getting those for free.

Star Wars games are on sale at Humble Store

The Six Best Star Wars Games Ever Made