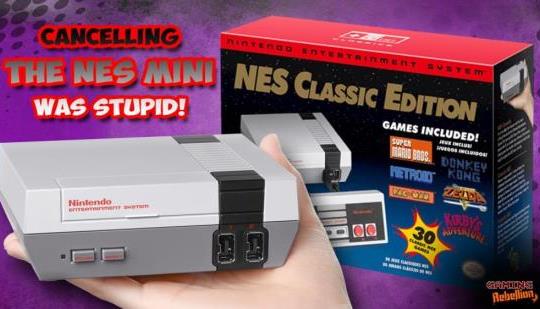 Cancelling the NES Mini Was Stupid

Derik Moore of Gaming Rebellion examines the main reason that is claimed for Nintendo shutting down production of the NES Classic, and details why that reasoning would have been very stupid on Nintendo's part.

Nintendo has reasons for cancelling it, and while I'm sad that it's cancelled, let's at least be intelligent and examine why the NES Mini even came out in the first place.

NES Mini exists because Nintendo was going to have a terrible holiday 2016. The 3DS was (and is) on the decline. The Wii U was (and is) dead, and the only big game coming to 3DS was Sun/Moon. Nintendo needed something to perk up brand awareness for their company, so NES Mini did the job.

Nintendo handles their old IPs differently than Microsoft or Sony. They release VC games in order to provide a "boost", not to round out the library. THAT is the annoying part. It is why you have a scattering of different games across the 3DS and Wii U eshop but no consistency between them. Nintendo has a slow Summer ahead for the Wii U? Announce Earthbound. Nintendo getting ready to launch a new Pokemon title in 6 months? Announce Red/Blue. NES Mini was simply a continuation of that philosophy.

If any of this is confusing, you can simply look back at Nintendo's treatment of older titles on Virtual Console. There are years of history to prove my point.

If/when the SNES mini comes out (I wouldn't count on this Holiday, but maybe next Spring/Summer?), you will watch them to do the exact same thing by releasing the system in fairly limited quantities and then cut production a year later.

It makes sense, however it still doesn't excuse Nintendo for cancelling without stating why, which is why I'll never buy from them again. I will not tolerate a company (regardless of who) just to drop a product without stating why, especially when the wrong crowd (scalpers) bought them up just to resell them at a higher price. All Nintendo had to do was release a why, and while it will sting, at least it will help understand their decision.

finally an article i can agree with.

Lol these are going for 400$ on ebay.its like,get real.payin that for emulator in a nintendo cosmetic box

Heres what i learned about Nintendo over the years... their fans dont mean shit to them! They never listen to them ever......

Microsoft's custom Xbox Elite Series 2 hasn't broken on me yet