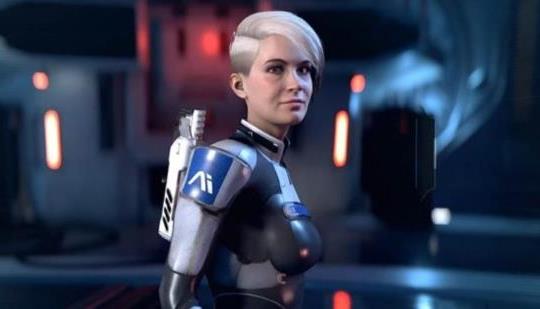 A few days ago, an article was posted on TGG regarding some of the female character models that we have seen so far in trailers for Mass Effect: Andromeda. The article, rightly, points out that the actress, Jayde Rossi, who lends her likeness to the female protagonist, Ryder, looks nothing like her in game. The author then goes on to show examples of other characters in the game and in past games to illustrate that BioWare may, possibly, be intentionally making their female characters “ugly”.

Adhttps://store.steampowered.com/app/1488200/Symphony_of_War_The_Nephilim_Saga/?utm_source=n4g&utm_medium=native&utm_campaign=sow_n4g_native&utm_content=png
- Comments (167)+ Comments (167)
TopNewestOldest
Expand all
The story is too old to be commented.

The plot is a non issue?

For them? More than likely.

i call it now...Ugly characters(especially females) =unappealable =forgetable game ...just wait and see(if there is no customizaion option) ...Mass Effect will be remembered lukewarmly like Dragon Age Inc...for its animalities and SJW friendly agenda not matter the sporadic quality moments

Don't worry, the game will have paper bags as DLC. Two bags if its a Krogan. Also I heard MEA lets you drink until you have beer goggles.

And naruga, you are correct. Its not about a game experience, its about an agenda. Look at that collection of characters. Seems like every design was subjected to some test group to check for triggers. If the women looked like Ashley from ME3 the aliens from planet Sarkeesian would have their objectification pitchforks out for a frontal assault.

the funny thing about it is that people hated what Bioware did to Ashley in ME3, she was a soldier now in ME3 she looks like a failed model.

We don't take kindly to questions.

You know I'm a big fan of Mass Effect but I might wait or all together pass on this one. Where there's smoke there's fire...

Big ME fan here too... but I was out the door do to the ending of ME3 and I've seen nothing that makes me excited about this new game. Literally, nothing, and ME was lovely my favorite IP of all time at one point.

I think if I played the ending without the internet it probably wouldn't have been so terrible.

This is the game where the main plot is to have sex with those females.

And/or guys. If that's your thing.

Seriously though, wonder why the Frostbite engine isn't catching more flack for this. It obvious that EA went with it because they own it, don't want to pay for UE4, but either its not as versatile, or that the their devs need more time to become familiar with it.

no that's the sub plot.

Doesnt seem to be a story here at all lol

Mass Effect: Andromeda - It's more than just a game about 'bumping uglies'.

Uglies bumping uglies. It's articles like this that make the muscles that create a hard grin within my face, work over time. I get a good laugh when people take this bullshit seriously. LMAO. *wipes away a tear* have a thumbs up or an arrow up, or whatever it's supposed to be.

Its not even that they are "ugly" they just don't look right, the character modeling is simply poorly done and the harsh lighting and shadows that form on the face really aren't helping this any. It comes down to art direction, if everything else in the game is done in a photo realistic style and the character model it not done to those standards you get the whole Uncanny Valley thing going on.

The whole "they are scientists not supermodels" argument is null and void, not to mention this trend of casting ugly people as some kind of a statement is absurd. Bioware is simply incapable of creating realistic human faces and animations, as evidenced by only all of their games.

I dont agree that they are ugly at all. Should all characters look like super models? i think they look like real, natural people, who are in a fight for survival

Super models ARE real people though

Yeah and all combat specialists, pilots, scientists, tech experts etc. etc. are all super models? Much like what is always the case in these games. It's not realistic, and this diverse approach is a bit more refreshing.

@Xenocide7
How is it refreshing? all the males are still hot as fuck so i'm told, so what you said goes out the window. The ugliness of the characters is selective. Also this is a sci fi fantasy game. It can afford to have idealised characters who are good to look at.

People nowadays prefer realism... But wait... Woman soldier??? Why are all these women so freaking strong??? That not that normal actually but I guess in these cases that's an exception.

Realism or not... They can't have it both ways..

Xenocide7 plenty of attractive people in those professions.

What you see on the magazine cover is not a real person, so...you're wrong.

They don't look real they look cartoony even out of place looking.

Ironically Jade Rossi is an actress/ model. But really, Bioware never did model "hot" female characters. Miranda had an effed up resemblance of actress Yvonne Strahovski.
The only exception is Liara.

The characters we've seen this far are okay except Ryder. She's hideous.

They're not as bad as some people make them out to be. While Ryder has what is referred to as a "butter face" I would still consider smashing like bros.

Well I for one want to have good looking females and males in rpg games. I'm not that great looking and really don't want to have characters like me in the in the game. So many of the Bioware games have women that look like men... hmm why is that I wonder?...

What is left then is just us adults that just want to play our games without having to listen to both of these group nag and nag and bloody nag about the most useless things in games.

Rigggghhhhhttttt. Fighting for survival but still have time for those alternative fashionable hairstyles and perfectly clean spandex.

Sure, except the normal women you might run into don't all look like gender on pansexual bisexual questioning feminist lesbians.

you got it a bit wrong, it's the anti-sjw crowd crying about not having a sexy hot female character.

No you have it a bit wrong, it's about Bioware pandering to the sjw crowd. And I do not mean only in manners of the appearance of the female characters. It is far more sinister than that. And it is something for which Bioware has a history that has grown more rampant with each game.

You must know a lot of ugly people...

there's nothing about those characters that are "ugly."

Like I said, "Beauty is in the eye of the beholder"

Maybe modders will fix it.

Looks aren't everything; it's the personality that counts, right? RIght? *Hears crickets*

They look fine to me.....
Although my character got married to Sera in DA:I - not sure what that says about my standards , lol.

Are the female characters ugly, or are they just more poorly animated than their male counterpart?

Well, we all know females are really hard to animate.

I can imagine mods making the faces look better

The GG folk tears over this are delicious. Nom nom

Idk, I thought the female protag looked kinda cute. Not jaw-dropping hot, but cute. I mean my top pick for a love interest in the original trilogy was Tali, and you didn't even really get to see her face in the game. Liara was pretty, but she wasn't some uber hot "goddess". Etc.

Not sure why people seem to think they all need to be super hot pinup models.

You make an excellent point about Tali. I thinking the writing will change people's minds about these characters, and a lot of them will forget that they complained about their looks. I was unsure about Jack back when she was announced for ME2, yet lots of us love her character. A lot of this has been a wait and see game. I hope a lot of the concerns we have will be quashed once we've played the game.

Agreed, but the animation just makes it looks flat out weird. The point is it feels like they take the model and then consciously try to make it look uglier. It just looks unnatural as a result. They should just take a real life average looking person and model after that.

The male characters don't have this weird approach. They are still very good looking.

Why the F does any of this matter?. They look like the majority of regular human being I see daily.

Pretty much the point of the article, the issue is making a mountain out of molehill

The main protagonist looks like something is really wrong with her. Good thing we can fix that with the character creator.

To those disagrees... You poor people must be exposed to some really hideous people.

Because youre so fucking gorgeous right? @The_Sage

We're talking about folks who have no concept of reality. Anything that displays an accurate account of reality is PC. It makes sense if you don't think about it.

Y'know SJWs should get up at arms that they're ugly women. Why do they only bash the hotties?

What? Your saying only ugly people are SJWs?

I um, I think I did hurt the ugly SJWs feelings though based on my downvotes. I'm sorry ugly people.

Haha you have a point there. I guess the idea is objectification is bad, and no one objectifies ugly people.

How am I suppose to get a space boner now?

On the bright side the females can scare away the enemies now simply by removing their helmets.

The blonde girl isnt bad but, Ryder, yuck what a stankface, I honestly cant even tell what ethnicity she is.

Exactly. I can't imagine what the people disagreeing have to look at on a daily basis to not think she's hideous. It's ugly with an added layer of creepy.

How they choose to design the characters doesn't really matter. However, they aren't being completely faithful to the models the characters are based on. Secondly, from the trailers I've seen, the facial animations for the female characters look exceptionally bad for a major studio production. Especially the main female protagonist, the facial expressions look like a 5th grader worked on them.

Gotta pander to ugly femenazis too now. We all know thats the perfect demographic for this game *sarcasm*