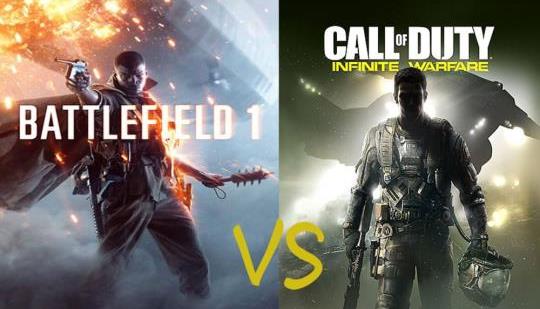 Battlefield Vs Call Of Duty, Who Is The King Of Shooters

With 2-3 months remaining until we get to see the latest installments in both franchises one can only look back at both franchises and wonder who holds the title for the greatest shooter between the two? This battle has been going on for years and here is my story on two of the biggest franchises in gaming history. Who will be crowned champion!

.............still thinking.........shall I run aim fire or use my sniper camp with my perks or play battlefield with just your normal basics no real perks and where sniper need to fire ahead of his target to compansate.......
brainfreeze I let you decide.

the answer will always be..... BATTLEFIELD lol.

both are bad and boring

Who cares, play what you want...

They are vastly different and cannot be compared.

Well from a single player campaign POV. COD wins over Battlefield overall and that is also me saying the last 4 or 5 COD Campaigns have not been that good.

Used to be COD, but I would say Battlefield has definitely become my choice game.

Well if I was 12 years old I would play call of duty. Since I'm 34 years old and like using my brain to use tactics and play a thinking man's game I'll continue playing battlefield.

Neither game is out,so you can't completely judge either. From what I've seen both BF1and COD:Infinite Warfare play similarly to their respective predecessors. Infinite Warfare still has yet to show the its MP(maybe the formula of the mp is being heavily revised?).

COD is a very random shooter (especially the most recent ones), their is no emphasis on team work, instead the game focuses on a "try-hard" mentality of getting as many kills as possible. BLOPS 2 was the last COD I got deep into, it was better balanced and less random than MW 3. Since I started playing Halo 5, Gears UE and BF4, frequently I have a very low tolerance for the randomness of COD mp.

When playing BLOPS 3 I usually only play it for 2-3 matches before shutting the game off, and I currently play the game only once or twice a month. I largely think BLOPS 3 is inferior to its predecessor, in both mp and singleplayer. The added "heroes" further increase the randomness of the games combat and it suffers from the same balance and hit detection issues that plagued the series since MW1

I find BF1 to be more appealing than Infinity Warfare. I personally enjoyed BF4, much more than my most recently played COD, BLOPS 3. Battlefield has much deeper combat, teamplay and strategy than COD. I would mostly likely buy BF1 over Infinity Warfare, since I like the style of gameplay Battlefield offers more.

Want the easy way to know?

Battlefield continues to taunt being a Call of Duty killer then always falls short.

Call of Duty: Vanguard VS World at War Map Comparison