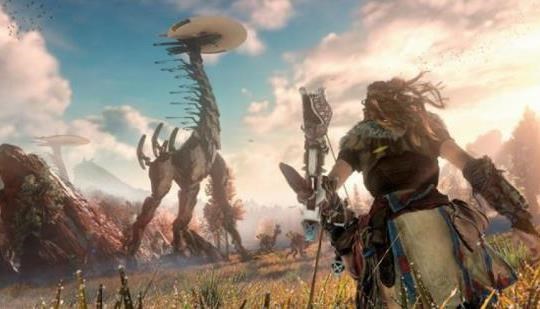 The game will be presented to the licensing marketplace for the first time at Brand Licensing Europe next week, in advance of its release in Q4 2016.

Was this ever a question?

I'm ok with it

Knowing Sony's track record for releasing new series every gen, I think many felt that way when this title was announced.

Can't wait, sounds like a good idea. Studios that go into apparel and other areas do a good job seeking to make as much as they can make from an IP, many of us would love to buy apparel from some of our favorite IPs to show our support and just based on over all fandom!

LOVE The Fallout and Skyrim stuff, also all of Valves stuff is really cool too.

This fits perfectly with PS4's campaign to broaden its install base to the casual gamers.

That imminent Holidays 2015 Price Cut will start the ball rolling.

@Miyamoto: Accept Horizon Zero Dawn isn't what you would call a casual game in the slightest.
Calling this game casual is like calling the Witcher 3, Bloodborne or Phantom Pain a casual game.

A lot of be required of the player to make sure you've got the require equipment for when you stuff up a mission like in the trailer and have to take on a massive armor plated beast like the Thunder Jaw.

There's probably a lot more dangerous creatures than that one and there's also the possibility that you'll need the items and skills to fight more than one at a time.

Horizon is definitely not looking like it's something for the casuals.
I will say that the concept is very appealing though to a large range of gamers, so from a marketing and the merchandising perspective there's a lot of potential in this franchise.

The possibilities for more games is also huge with this game.

I'm not sure where the writer of this article or anyone else gets the idea that this isn't coming out until Q4 2016, I mean Guerrilla's last 2 games both released only 9 months after they were announced.

Considering how good it's already running it's at least likely to be releasing in the 1st half of 2016, otherwise Sony and Guerrilla wouldn't have bothered announcing it until PSX.

Shinobi602 has been bang on about the details surrounding this game and he said the original intention was for this to be a Fall 2015 release, obviously things got changed, but it's had over 4 years in development already, 2 years of which most of a studio with over 270 people have been working on it.
Obviously RIGS is being made by part of Guerrilla's resources, but Horizon is the major deal.

This is most likely coming in the 1st half of next year.

Ehmm No...since no one has played it yet no one can judge it. It could very well be a piss easy casual game

On the other gand it could be an intense challenge.

The difference is that Guerilla's last two games were both existing IPs, with engines and technology already crafted to build those games. This is different, dev time and marketing are liable to take longer. So I think Q3 or Q4 2016 seems more reasonable.

What exclusive isn't a series at this point besides Ico and Shadow of the Colossus?

I'd like a 1/6 scale aloy figure. And ThreeA to make a dino bot or two.

I will buy an Aloy t-shirt and rock it hard, no doubt.

I want this Dinobot

As a garden space heater

I think you'd get a good TV reception with that thing.

Now this makes me want Guerrilla to include super robo-dinos, Shadow of the colossus big!

Think about it for a sec, these super massive dinos can be optional in hard to reach areas just like super hard enemies like dragons (Kalameet, you bastard!) and Black Knights in the Dark Souls series.

Drink dispensers from the collector bot things would be fun for the game room.:) You could life the tail, and it comes out of...well...you know.

I would have a collection of each dinobot in my room.

Guerrilla games have always been very consistent with their game releases, so you can be at least 80% confident Horizon will come in 2016 like they have stated. Maybe this could be their first delay, but I hope not. O want to play this so bad

This indicates Sony are putting a lot of eggs in this games basket. They probably wouldn't have done this had Horizon Zero Dawn not have just overwhelming praise at E3. It even took some spotlight away from Uncharted which is unreal. I can't wait for this game, if the new hired writers over at GG nail the story this game is gonna be a HUGE franchise for PlayStation for a long time.

I don't know about that, as the title has been in development for a long time and this deal could have been going on for a long time too, they could merely be investing deeply into a franchise.

I don't really know how much of its E3 praise is due to this as they've invested a lot into it already when we had no clue about it years ago, ie getting Witcher and Fallout developers on board and such.

How about CG "dolls" or whatever they're called for Machinimas?

That's cool. Sony should make action figures of the Brachiosaurus. It would also be cool if Sony put a large statue of the mechanical Brachiosaurus on top of their new PlayStation theater in Times Square before the game releases. That would be smart advertising. Or put 1 up in Tokyo since Japan loves dinosaurs. I know it's not gonna happen but it would be cool lol

I'm honestly more excited for this than I am Uncharted 4 and that's saying a lot. I can't wait to see more of this game. I also can't wait to see the other games Sony's studios are working on. Only 3 more weeks till PGS!

That's what I thought of Halo Originally at the start.

A bunch of colorful monsters running around making stupid noises. But hey the rest is history.

I think this looks more interesting then Farcry Primal.

Awesome looking game from an awesome developer but, no. This is lame.

Can't wait to play this GG game! 2016 is going to be a defining year for PS4. I always get a laugh out of the reading comments on this new IP LOL ...

"Not Feeling This Game..Too Many "Why's" ...Just Feels Tacked On /s

I'm more interested in the branding ideas than the merch itself. I'm not buying this stuff, but I like the commitment.

This game looks like it's going to be a must have.

PS4 is delivering more interesting exclusives than Microsoft. Not to mention Microsoft hasn't had one exclusive with an 90% overall review score in two years.

PlayStation Plus Extra is quite solid, but Premium needs a lot of work