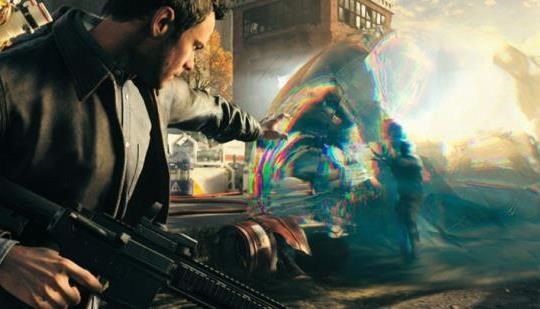 NZGamer:
Based on what I’d seen of Quantum Break prior to XONZ, it’s not a game I’d been particularly excited about. It looked like yet another generic third-person shooter. Sure, it has a time manipulation mechanic that looked vaguely interesting, but not enough to dull the feeling that of retreading very well-worn ground.

A new gameplay preview shown off at XONZ changed all that however, by giving me a good look at what you’re doing when you’re not using your time powers to kill swathes of faceless goons.

Adhttps://www.releases.com/?utm_source=n4g&utm_medium=native&utm_campaign=c1
- Comments (17)+ Comments (17)
TopNewestOldest
Expand all
The story is too old to be commented.

This adds yet another dimension to the game.

Perhaps a Prince of Persia Sands of Time type element?

The platforming puzzle elements were shown about a year ago. I'm not sure why a gaming website is so behind the times with a game.

By the time Quantum Break releases I'll already be a Multiplatform Gamer.

Next year is going to be seriously overwhelming for me ....time to start saving up! /

The game looks really cool. I am curious how it's live action ties in as well. 30 minute cutscenes? How much gameplay in between them? Lots of questions really.

Remedy has always delivered in my eyes so i'm pretty optimistic about this game. I hope they don't fail with the TV-Show part. They already took a few steps back from their original idea at least it seems like that to me but i also think that MS would not let them deliver a shattered experience.

Aside from the casting changes, the game appears faithful to what was originally presented... That said, I'd like to see how Paul Serene and Beth Wilder play.

Paul has his own unique abilities (he can see potential futures) and a private army at his disposal, whereas Beth doesn't seem to have any powers - though she does have 'military' training... Each of the playable characters will likely require a different approach to combat (assuming Paul isn't afraid to get his hands dirty), which should keep things from getting too repetitive.

Sam Lake is yet to tell a mediocre story, so I wouldn't worry about the plot... My only real concern is that it'll be delayed again, which - judging by the recent presentations - seems unlikely.

I'm guessing Remedy learnt a lot from Alan Wake - which stayed true to it's reveal, despite extensive delays.

I agree. I've yet to experience live action scenes in a game which weren't complete trash.

Have you played Alan Wake?

It had a live-action Twilight Zone-esqe show called 'Bright Falls', which would play on televisions scattered throughout the game... and it's add-on 'American Nightmare' had some genuinely disturbing scenes with Alan's evil doppleganger, Mr Scratch.

Quantum Break has a top-notch writer, a proper cast and a stack of $$$ making sure it's as good as it can be... the fact that Remedy are giving players the agency to alter the show suggests that they're quite confident in their storytelling abilities.

I think this is the big game of Microsoft for 2016!!!! Nothing comes close. After Alan Wake i think remedy is again doing a great job.

Agree 0Disagree 0
▼✖-+
SPAMInappropriate
Show all comments (17)
The story is too old to be commented.
80°

6 years later, the most underrated travel game deserves a sequel

The 10 Biggest Video Games Ever Ranked by Install Size