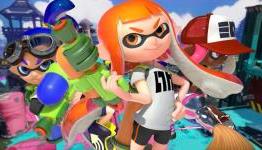 Rumor: Here's How Many Units Splatoon Sold in May

NPD results were released today, and Splatoon debuted in fifth place in the United States. Nintendo failed to release any sort of statement on the sales of either Splatoon, Puzzle & Dragons, or their hardware. As a result, the numbers were leaked by a well-known source on Neogaf.

"But May’s biggest surprise is probably Nintendo’s Wii U exclusive Splatoon.
The colorful shooter did not debut until May 28, which means it only had two days of sales on this chart.
Despite that, it was able to come in at No. 5 overall.
This is impressive for a new intellectual property that is not widely available on all systems."

Oh, and keep in mind that this is not including Digital sales or Phys+Digi in Europe, either.
Those combined, it may already be over half a million.

Considering the popularity of The Witcher 3 across all platforms, it's an even better sign that Splatoon ranked that high with so few days tracked, as well as no digital or Europe sales counted.

While I agree with most of what you said, I want to note that the argument of "not counting digital sales" is moot, because (as far as I know, I could be wrong), these numbers never count digital sales for any games on any platform.

I got my copy digital too! Loving the game!

Not all games need to sell a million to be a success.

* Splatoon selling millions won't happen until Splatoon 2 on the next Nintendo console(possibly), so for right now this is a good start for a new IP.

Nice that Splatoon is doing well. Will get my copy soon.

I was skeptical but it's a defo now for me getting it next week.....the squid form looks like it adds an amazing depth to tactics...

I was hesitant too, but glad I got it. Much more fun than I thought it would be.

Anyone here struggling to get online??
Can't get Splatoon, eshop or anything to work...browser works but that's it! No Netflix, YouTube...?

Same with the 3DS

Do a system update.

You probably missed the system update. That is your issue more than likely. Go to tools and do the update. Also make sure you turn on automatic updates so you do not have the issue again.

I am on auto update but it's working now so who knows?!

It's super fun and refreshing for a new IP, got that Jet Set Radio feel.

Its honestly very impressive how influential Jet Set Radio was for such a commercial disappointment. The urban setting, unique soundtrack and counter-culture vibe were obviously big inspirations to both Splatoon and Sunset Overdrive.

When my son and I went to pickup a copy Gamestop was sold out in multiple locations. I have not run into that before with WiiU software.

We had to drive a bit further, but we did secure a copy.

I hope they release the soundtrack for this game....it is fantastic.

On the day it came out we went to three stores before getting our hands on a copy. My son asked and we scored the last copy kept behind the counter. The shelves were bare and only had placeholders.

If you like the rest of the songs in the game, you're gonna fall in love with the Squid Sisters theme that plays during the final half of the single player mode's last boss.

I won't spoil it for you and your kids, but I will say this:
Get a camera ready. You're gonna want to record their reaction.

Actually, they need to add a couple of more ost's to the multiplayer. It gets kind of repetitive hearing them all the time.

We (myself and 2 kids) absolutely love Splatoon!

Splatoon is such an amazing game. It's been a while since I've seen a game that's just so FUN for people of all ages and skill levels! This is what happens when Nintendo really tries something totally new, and I love it.

Game is very addictive. I just wish you could use pro controller as the primary controller. After playing with it in the head to head mode it is awesome!!

I just wish they higher-up the level cap from 20 to 40 or more and add like some sort of prestige mode too, but with a different name and some camos to the weapons would be nice.

Ok so it's done well. With the new map out I feel the can have 16 player on the map. I'm thinking they are going to have 4v4v4v4 matches in that August update

It should sell good considering thats its the only wii u game that has came out in a few months, thats how Nintendo stays rich get rid of the 3rd parties so that the people that have wii u can only buy their mediocre cartoon graphics based kiddie game.

It is competitive against Nintendo greatest output of games. Almost all the big hitters are out, even the casual favorites and it is kicking tail. Go splatoon!

Plus it really is addictive good. Plus the art is on point.

This game would have been much more compelling with big laser guns and blood everywhere. *FLEXES MUSCLES!*

Agree 2Disagree 0
▼✖-+
SPAMInappropriate
Show all comments (32)
The story is too old to be commented.
40°