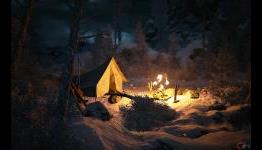 GH: "Right from the very beginning, developer IMGN.PRO’s Kholat had been on my “radar” for two reasons. First of all, it’s narrated by famous British actor Sean Bean. Secondly, it’s based on a true event known as the Dyatlov Pass Incident, so get ready for a brief history lesson. It all happened on the night of February 2, 1959, when nine Russian hikers died from an “unknown compelling force” in the northern Ural mountains; more precisely, on the eastern side of Kholat Syakhl (hence, the game’s name)."

Interesting game. Many reviewers didn't like it but the gamers seem to love it. Must try.

Kholat review – An Avalanche of Aimlessness, A Blizzard of Banality - TechStomper

Kholat has more than 3,5 million users but only one unit sold in Nepal