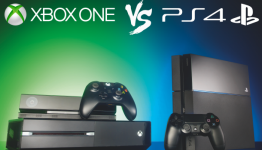 One Sales Edge Xbox One Still Has Over PlayStation 4

ADG talks about one sales edge that the Xbox One still has over PlayStation 4 from his personal experience owning both consoles.

PS. This article wasn't written for click bait. It was really written based on what I feel about games and DLC sales (NOT CONSOLES) which are important. 24 hours can mean a lot for a business cause every single dollar matters just ask anyone in business. I mention this in the article in several points. Thanks to all rather you hated or disliked for your output and view but all of this hate seems like sheep and misguided individuals with an issue against the writer and not paying attention to the topic at hand. It's in all the responses over most of you responded with things that the article wasn't even about.

egmnow.com
One Sales Edge Xbox One Still Has Over PlayStation 4antdagamer.comAntDaGamer

holy fack that was a garbage "article":

In final, Sony needs to make that final step to secure their edge."

...wow, really? why would N4G allow such crappy "articles" to be approved here?

I edited for you sir. I changed some issues that was cause from copying and pasting. I also changed cause to because. Anything else you want me to change outside my opinion I will do. Also, this article was about something I felt truly was an advantage to Xbox One in the sales department. I do believe there are many like me that purchase on Xbox One just cause it's available on their marketplace first.

Antdagamer: way to step out on a ledge and write an article. I'm not saying I agree with your point of view,but That's more than most of the critics below have done. Just be prepared to face criticism, no matter how great your opinion piece may be someone will always disagree. Keep up the writing, improve your skills, and don't let all the MONKEYS in the comment section sway you from a passion.

They say that if monkey had a typewriter and hit keys randomly for eternity then the laws of probability suggests the monkey would eventually write the works of Shakespeare ... It has yet to be proven.

If the monkey doesn't produce, I say spank the monkey.

This article isn't about just my purchase. It's about all the people in the gaming community that will purchase content on Xbox One first just cause of when they release it. This isn't spam. I wrote this article from the heart and to see someone smash on the entire article from one reason..well I could easily take that statement out would that change anything..My article would still be about a sell advantage Xbox One has. Calling my work spam is wrong on so many levels but what can I do..

"Shouldn’t this be one of the rewards outside of just being able to play the once free multiplayer and the occasional free games that consist mostly of indies and low selling titles."

This pretty much says everything I need to know about you.

If you want people to take you seriously you could start by writing properly.

If you ever play Bloodborne, I know you would choose Waste Of Skin.

It's not much of an advantage, though. Not anymore. Last gen, when they got the Call of Duty DLC early, it helped sell that game more. But it didn't really help the console. And it's not helping now.

Besides, why not mention the DLC for Destiny? I'm sure there are other examples you could have looked up, but you didn't even bother.

That's what makes it lame.

If the article is not pandering to PS4 fans, its not welcome here.

I won't call(even tho I want to)it garbage. I know you put alot into writing and its not easy. I know I can't do it. But I also don't like having my time wasted. Thanks anyway..

This article is the most desperate piece of hyperbolic tripe i've seen in quite some time. It may be an opinion, but it is quite the grasping opinion.

I for one am glad Sony is NOT focused on that, rather the focus on awesome exclusives like bloodborne. I hope they dont change let m$ pay for the dlc first while sony makes new ip's.

the article is about things just becoming available before Tuesday. You know Microsoft updates there store or starts the day before. Content that will be getting tommorow will be on Microsoft's store tonight. Several DLCs that aren't DLC first DLC's are already available. Sony could just change their update schedule to a little sooner. I guess I did a bad job getting that point across.

Timed exclusives of any kind are a complete non factor for me, and what you're talking about doesn't even qualify to be called a timed exclusive.

Yea I guess you did. Regardless, until this apparent sales edge actually translates to some kind of sales edge, or anything resembling the opposite of a sales deficit, then it really doesn't matter, at all. And that's not an opinion.

I've been a sub to you're Twitch channel for a while and I think you're a good guy, but this article feels like it's kind of reaching. SOME content getting updated a day before PS4 is a selling point for X1?

I understand that you have a job to do, but waiting a day for some content is not going to kill your career in anyway. And btw, MS pays to get certain DLC first. That can't be helped.

I'm speaking of normal updates in this posting not exclusive DLC. I'm speaking about the fact that March 31st PSN update is already pretty much up on Xbox Live. Sony could start their updates earlier to add-ons just like they do with some games.

But, I do understand what you mean and how it can be frustrating.

What are you talking about then? Because some of the things that Microsoft is putting in their updates have and already been out on the ps4. So it can go both ways.

This "sales Edge" you speak of, how's that working out? Last I checked, not so well.

1. Your writing needs a lot of help. Please look into improving your editing process as well as working on the way you present your voice. It's very cluttered in thought process and not at all streamlined. Makes me gloss over your words rather than form coherent ideas based on them.

2. The "edge" you speak of is ridiculous. Who's going to go out and buy an XBO because they had to wait a few more hours for content on the console they already own? If you honestly believe that people are going to move from PS4 to XBO because they see some gameplay online a little before they have access to it themselves, then I'm not sure what to say other than... No. Just... no.

I'm not really into DLC. In fact I think its a bit of a tumor on the landscape of gaming. Certainly it has no sway over which version of a game I buy, even though I have no Xbone, but I can still say that with confidence since I bought GTAIV on PS3 over X360 despite MS's $50m investment.

I guess if you need to make youtube videos and waiting a day is costing you I see your point, but I wouldnt call that a sales edge for the average gamer by any stretch of the imagination.

This article was more about title purchases for people who own both consoles. I never said once anything about console sales..I was talking about DLC and game sales, mostly. Thanks for replying.

Examples would be content scheduled for tommorow's PSN update.

These aren't timed exclusive. These are normal DLC's. This isn't about nothing more than EVERYONE getting non exclusive DLCs released around the same time. PlayStation owners shouldn't have to wait. It's not just me. It's the hardcores, the Youtubers, the livestreamers and more. It's just appalling to me to see how many people have commented here, especially those that have a PS4 and have an issue with me standing up for PS4 owners getting content sooner. Oh well, now disagree on something that is beneficial to your experience. It's common sense.

I own both and never has that ever been a consideration for me... nor do I personally think anyone really cares for the most part. I will even go as far as to say that getting a game that is potentially inferior just because you get it a few hours early is pretty much ludicrous unless you are a game journalist and you want to throw out click bait as soon as possible to maximize revenues... then I could see where every hour counts.

This article gives me cancer

That's a little dramatic. It's not that serious.

Awwww, it's cute how N4G allows random teenagers to write so many opinion based articles lately.

Agree 0Disagree 1
▼✖-+
SPAMInappropriate
Show all comments (37)
The story is too old to be commented.
30°

10 Underrated PS1 Games You Should Play