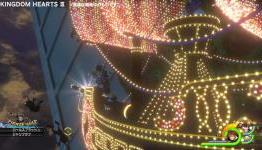 Kingdom Hearts 3 has been confirmed to appear at D23 Expo this November and rumors are circulating that gameplay would be available to fans.

I am pretty sure we will see something at E3 first.

its quite embarassing how fast kh3 production has been compared to ffxv.

im also wondering if there would be any changes in the look of the game. kh3 is now on the unreal engine and im just wondering if certain things will look different.

and yes,compared to ffxv which progress alongside yet to complete luminous engine,kh3 benefits from already finished engine ue4

versus xiii was being on a developed engine aswell, the xiii engine.

gameplay has been shown of that game a few years after the announcement and the advent children blu-ray showed gamers the behind closed door video of versus xiii.

since then it just seems like they have been doing nothing in develment. i find that very embarassing, especially for their number1 franchise.