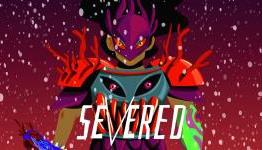 Severed PAX East Preview – A Game Worth Playing I The Koalition

Stephanie Burdo of The Koalition writes:
Taking the stage as the “most anticipated Vita game of the year”, is DrinkBox Studios’ new indie title, Severed. With such games as Mutant Blobs Attack!!! and Guacamelee under their belt, DrinkBox has slowly, but surely, become a head studio in the indie gaming scene. Each game possessing it’s own unique themes along with flashy new takes on traditional gameplay, DrinkBox has yet to fail when it comes to delivering pure quality to their players, title after title.

Adhttps://www.releases.com/?utm_source=n4g&utm_medium=native&utm_campaign=c1
- Comments (4)+ Comments (4)
TopNewestOldest
The story is too old to be commented.

With DrinkBox at the helm, I'm definitely going to be follow this game.

I'm a big fan of Drinkbox and will definitely be picking up this title later this year. It's very refreshing to finally see a game coming to the PS Vita.

Looks like a game with potential. I'll look out for it.

I love the look of Severed. The gameplay looks like something Id really want to spend a lot of time with on my Vita.