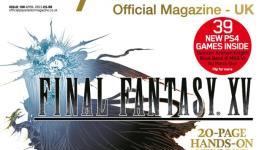 It’s a been a long time coming, but Final Fantasy 15 is almost here. Well, it's not too far away... Perhaps this explains why director Hajime Tabata has admitted there is plenty of pressure for the game to succeed. Previously working on PSP only titles Before Crisis and Crisis Core as well as Final Fantasy Type-0, Habata understandably has a lot on his shoulders with the new-gen only title.

“Well, the amount of money that the company invests in projects for the PS4 is completely different to those for the PSP, so I can certainly feel a difference in the anxiousness from higher management!,” Hajime Tabata told Official PlayStation Magazine with a laugh.

The new issue of Official PlayStation Magazine is out on Friday, March 13th and has over 40 pages covering Final Fantasy with an Amano art book and a 20 page FFXV hands-on cover story where they’re not only calling it “the best Final Fantasy in generations” but also the “most ambitious RPG ever made”.

Good! Pressure to make a great game I hope!