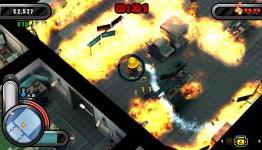 "Flame Over is the newest Vita game from Laughing Jackal, the indie company that brought us the likes of Hungry Giraffe and OMG! HD Zombies.

As the title may suggest, Flame Over has a lot of fire in it. You play as Blaze, a firefighter, tasked with the job of extinguishing all the fires that are blazing through a burning office block. The level ends when you’ve put out all the fires, but there’s people – and cats – to save on the way and mini tasks to complete. Saving people grants you extra time on the clock, cats grant you an extra heart, and the missions grant you tokens which allow you to buy upgrades next time you play.

Flame Over is a “rogue-like” title, in that you’re constantly battling through the same areas in order to gain upgrades to get further next time. The difference is, instead of fighting monsters, you’re fighting fires. And instead of firing a gun and throwing grenades, you’re spraying water and chucking water bombs." - GameSpew

Adhttps://store.steampowered.com/app/1488200/Symphony_of_War_The_Nephilim_Saga/?utm_source=n4g&utm_medium=native&utm_campaign=sow_n4g_native&utm_content=png
- Comments (0)+ Comments (0)
TopNewestOldest
The story is too old to be commented.
750°Hot56

Coming to PlayStation Plus in March: Broforce, Galak-Z, more

Review - Flame Over | Use A Potion

Flame Over - A Musical Review | PSGamer