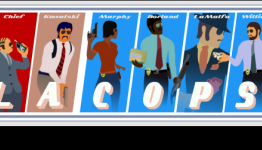 Armed with a boiling hot cup of coffee, ridiculously cliched moustaches and a determination to clean up the mean streets of L.A in the 70’s, L.A Cops is a run and gun tactical shooter that doesn't take itself too seriously. Developed by Modern Dream and Published by TEAM17, L.A Cops was originally released in 2014 as part of Steam’s early access.The game is centred around Cops Kowalski, Williams, Borland, Murphy and Green. They all share the same goal and that is to make LA’s streets safer and that means a whole lot of gunfire and some cheesy remarks.

Adhttps://www.releases.com/?utm_source=n4g&utm_medium=native&utm_campaign=c1
- Comments (0)+ Comments (0)
TopNewestOldest
The story is too old to be commented.
90°

The Team17 Indie Collection arrives on Xbox One, but it comes with a ton of content

Which of this week’s Xbox Live Deals With Gold bargains should you pick up? – 21st June 2016

Law And Order Bundle Is Now Available For Xbox One