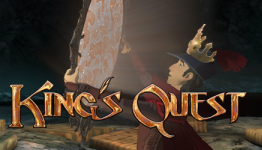 Back in the ’80s a game released by the name of King’s Quest; and while many younger gamers may not recognize the name, its influence on the adventure game genre cannot be overstated. Back in a time when many games only used stagnant backgrounds and text prompts, King’s Quest pushed the concept of using animated visuals to immerse players. Now, over 30 years later, not only is the company responsible for it making a return, there is a new King’s Quest slated for fall of 2015.

I remember the original.

Interested to see how the franchise translates since it has been so long since the original.

I loved the king's quest series.

I'm an old school King Quest guy. I remember playing this game before they implemented the point and click interface. The first few games you had to type out every action. And lord forbid you didn't know how to spell something or typed something wrong.

Here's hoping this game does well because I would love for Space Quest to be the next game to return.

I'll really have to keep an eye out for this one.

King's Quest more or less set the standard by which all other adventure games are measured.

the new King’s Quest is being told through the eyes of elderly version of series protagonist King Graham, who is telling his granddaughter Gwendolyn of his past adventures.

I wonder if that is Alexander and Cassima's child?

I just need to see a couple gameplay videos and I might just be sold.

Which Game Series Burned You Out?