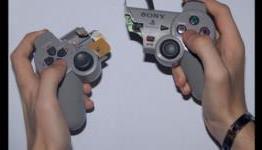 5 things games need to stop doing and are easily fixable.

1. dlc to complete or explain a game

2. games being released that are broken

4. no changes to controller buttons

Id like to add cutscenes that cannot be paused, this is quite a big deal because of phones ringing or babies needing attention. Games that leave you utterly confused as to when the last save occured, how much will i lose if i just quit now, see uncharted series to see how to do this correctly.

Oh and those damn checkpoints right before a cutscene that cannot be skipped, die a few times on that part? Watch that cutscene 4 or 5 times lol.

Couldn't the suspend software function take the place of that?

"Welcome to the tip of the first year iceberg for Wii U."
Basically #2 in a nut-shell, if you add the words "late and incomplete" to the statement.

I wish more people could empathize with how bad we felt we've been treated by third parties...

If one version is going to be getting console-exclusive content that isn't being paid for out-of-pocket by the console company themselves, then all consoles should be getting something exclusive for their own versions.
Similarly, content that is standard across other versions should not be excluded for any reason. Especially if you want maximum potential sales and do not want to piss off consumers and burn bridges.

#2 More focus on gameplay rather than graphics/resolution.

We've had too many games lately that have been relying on overhyping their looks to sell to the dudebro crowd, then failing to live up to their own game-play promises.
Interactive movies should be a niche, not a norm. Focus less on your graphics budget and more on the parts that add replay value to the game.

You can only see the same cut-scenes so many times before you stop caring about watching a story, no matter how good you consider it to be.
But good gameplay lasts far longer than any length of good story.

#3 More games that allow the user to save anywhere they want, with certain exceptions that might break the game/make it too easy.

I feel like there's too many games that rely on checkpoints, and end up forcing players to go back through a whole lot of annoying troublesome areas, due to one single mistake along the line that forced a restart at said checkpoint.

#4 More action RPG's that allow for flashy combat regardless of weapon selection.
Speaks for itself.

I agree but we will always get broken games b/c of deadlines. Dlc is how they make money now, but can't they be creative instead of breaking off a part of the game. Infinite was a great example of good dlc. It's great to want more of something. 1st, no dlc for annual releases lol!

Cutscenes should always be skippable, especially in an mmo. And yeah, buttons should ALWAYS be customizable. And decent trophies would be nice. If your game is 5 hrs long, at least a simple trophy can make it 2-3x as long.

Season pass DLC crap has got to stop. Pay $25 bucks to get a discount off paying for DLC. Before you know it you pay $100+ dollars for a game that's still probably average and incoherent

#5 is understandable though if you are announcing a new IP for example.

Could not disagree more with #5 but the rest are agreeable.

DLC, hate it. I will dont want to see it. If I see it I will boycott the game and pirate it!

Battlefield Discord Not Handled by DICE and EA Anymore, Once Again Ran by Community