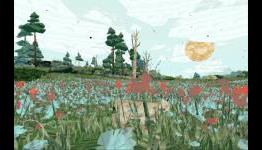 Thomas of Ghost Volta: "Shelter, as a series, is a difficult thing to describe. This is not because its themes and motives are difficult to understand or sympathize with, but rather because the games industry has taken the word which would most directly describe it and rendered it meaningless. Yes, Shelter 1, and 2 are emotional games. Many gamers now recoil at the very use of the words ‘emotional game’, but it’s worth clarifying exactly what this series in particular does to justify the use of it. The Shelter games are characterized by their exploration of the concept of motherhood: not simply having children, but establishing a real connection with them. In the original game, new badger-moms were tasked with keeping their young ones safe through a variety of tasks: from feedings and protecting them from predators to ensuring they grow up to be strong and capable adults, all without a single piece of dialogue or text description. Interestingly, each installment has had its own spin on this concept of care and motherhood—with Nurture mode from Shelter 1 being set around your infant children and caring for them; Shelter 1 itself exploring the concept of the sacrifices made when raising offspring; and now Shelter 2 focusing primarily on the journey and feelings of the lynx mother as you attempt to give your babies the best possible chance in life."

Next Stop: These Are Some of the Hardest Achievements in Games