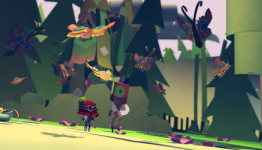 PSLS: Tearaway Unfolded, a remixed version of the PlayStation Vita game simply called Tearaway, is coming out this summer for the PS4, and it looks like it will be as great as it was when it was originally released.

Playing it at PAX East 2015, I got to experience the game’s updated visuals, remixed levels, and changed control scheme. Media Molecule apparently did a great job with the title’s graphics, as it looks like it could easily be native PS4 game rather than a ported one. They did a pretty good job with the controls as well, utilizing the motion sensors and the touchpad on the DualShock 4 controllers nicely and in a way that doesn’t really make it any more difficult than the PS Vita’s control scheme.

Tearaway Unfolded Update 1.04 Is Out On PS4