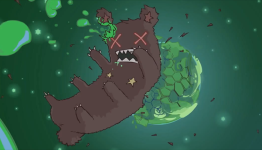 CO:
When I first read about The Behemoth’s Game 4, my mind spun with possibilities regarding the title’s meaning. Game 4…. perhaps it refers to a pivotal match in a sporting event? Or maybe it concerns a metaphorical “game”, one that pushes a near-apocalyptic world to its limits and tests the will of its people, straining their desire to fight on and persist. Heck, the Game 4 designation could be entirely simple, referring to a predominant gameplay mechanic or attribute its developers are particularly proud and fond of. Lost in superfluous thought, it didn’t once occur to me that Game 4 could literally mean exactly what it says; this will be Behemoth’s fourth published title, and damnit if they aren’t going to issue code names accordingly.