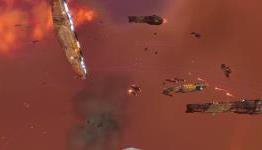 Hey Poor Player's Adam Foster writes: "Homeworld Remastered Collection is simply a masterclass in remaking an old franchise: Take an old game, leave the almost flawless formula alone, and touch up the visuals and audio. Firing missiles at a mothership still feels immensely satisfying, and the focus on deliberate tactics instead of frenetic micro-management is a welcome respite for someone who loves strategy games but is atrocious at Starcraft. It’s just somewhat unfortunate that the voice acting and user interface didn’t carry over better, but those are minor concerns when we’re able to play Homeworld again."