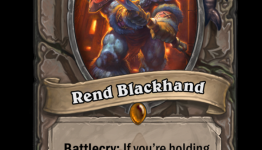 The new announcement of Hearthstone's upcoming adventure, Blackrock Mountain, was previously hinted at in a leak last month that said the next Hearthstone update would be in April. Today's announcement gives several good pieces of information on the upcoming content, but also states the content is coming just as the leak predicted.

Adhttps://store.steampowered.com/app/1488200/Symphony_of_War_The_Nephilim_Saga/?utm_source=n4g&utm_medium=native&utm_campaign=sow_n4g_native&utm_content=png
- Comments (0)+ Comments (0)
TopNewestOldest
The story is too old to be commented.
320°74

Is Activision Blizzard in a rough patch or a longer decline?