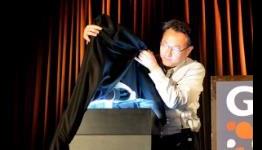 GCO: "Sony president Shuhei Yoshida recently discussed the problems that plagued the PlayStation Move and how the company will avoid those problems with Project Morpheus."

I remain unconvinced. Not just at Morpheus but VR in general

It will come, stick around for a while then slowly fade out.

No, VR is not going away this time.

Games and interactive entertainment are going to continue to evolve and diversify whether you're on board with it or not.

VR is a powerful experience for people. It has the potential for mass adoption once it gets to market and people start to get their hands on it.

New tec comes out and people ponder on the number of possibilities but in the end because of restrictions they are limited. The shiny new tec vibe fades away and people loose interest.

All Morpheus needs is software to support it, which it already has, and an acceptable price.

Move didn't have the software to support it. 3D still hasn't solved problems involving eye strain and visual fatigue. Morpheus doesn't have either of those problems.

Motion controls and 3D were just stepping stones. On their own they're very weak, gimmicky experiences. After you've flailed around in front of a Kinect and played Kinect Sports for 20 minutes, the magic wears off and it just becomes annoying. Same thing with the Move. There was never any meaningful support for the device, so no one bothered with it.

3D is okay, but it's not really worth the hassle. I have a 3D monitor and use 3D Vision every now and again, but the experience is only negligibly better.

VR actually puts you into the game. It's literally a game changer. Until you've actually sat down and experienced VR, it's hard to judge its actual potential.

Putting on a Rift DK2 for the first time was a transformative experience. Even if VR doesn't explode out of the gate, there's still going to be a die-hard community for it that will keep the platform pushing forward.

Foxtrot, you as well as many other naysayers really dont seem to get what VR actually is, a comment I often hear from people trying it for the first time is, that until you have tried it you really dont realise the difference VR makes.

VR will only grow its potential goes far beyond gaming, whether thats in the form of Morpheus time will tell, but the people comparing VR to motion controls really are missing the point.

Ironically, the Move system seems custom made for VR too.

"Project Morpheus won’t be another PlayStation Move"
we will see Yoshida. They said the same about Vita and their vision changed as well.
Gonna wait at least a year before i can trust these words. i'm tired of buying devices that get no support later on. I love Move and i LOVE Vita but Sony didn't support them the way they should have.

People don't like to gear up to play games. Also vr is more socially isolating of the people around you than regular video games, so it's likely to develop a stigma that it's for losers like videogames had in the beginning.

I think if it takes off at all, it will become a fad like videogames were in the early 1980s, then suddenly it won't be cool anymore and collapse. Maybe like the video games industry it can slowly claw it's way back.

I'm not convinced by claims that "this is the future" I've seen claims like that too many times not pan out.

peripherals will always have an uphill battle. the selling audience is not 1:1 on the hardware meaning publishers have a tough time funding projects for them.

the best way for morpheus to succeed is other vr models also do well and you have a pool of software on multiple platforms. nobody is going to make games only for morpheus unless they are smaller and less expensive projects.

what happened with the playstation move isn't isolated to the device being hard to make games for, it boiled down to lack of software. larger games like socom used the playstation move but gamers were not convinced they needed to get one because they could play the game with a regular controller. you need to make games around the device from the ground up so you have to buy the peripheral to go with it.

not one aaa game was created for playstation move that couldn't also be played with the dualshock. the same thing will happen with morpheus, nobody is going to fund expensive projects for morpheus only.

What do you mean go away? We don't want it to go away! Vr is what real gamers want! Who the hell wants to game from the tv. Wtf

You can still use a traditional controller with Morpheus. Move isn't required.

Well, let's suppose that Morpheus will also double as a static 1080p screen for EVERY PS4 game ...

That increases the potential market substantially and if Sony don't do it they're NUTS.

That may be true for many genres but for anything vehicular, it will be a game changer. I personally want it for Project Cars and the like, but it will work well with flight/tank sims too.

And it's not just these regular vehicle sims that will be transformed. Imagine VR support for No Man's Sky? Could be incredible.

If your not convince with VR then you need to watch this:

Did that change your mind now?

I dare you to try those on playing that game in the dark.

VR is not trying to 'beat a nice, traditional controller'. It is a differentI kind of experience, and it is going to co-exist with traditional TV/Monitor-based gaming.

As for me, I've personally been pretty sceptical about VR until few months ago when I tried the last Oculus DK myself. Oh man was I amazed!

Looking forward to Morpheus now, gonna get it day-one if the price won't be insane.

You're very right. At least at the stage it is now, it's not gonna work. THere is a lot of issues with it. Peple around here are talking like it's something new, but I've played VR before most of you were born.

They're not all aimed at the same demographic though. There's casual and then there's the standards and then there's the no hold barred early adopters etc. This may not replace the standard game controller, but will be a nice addition to someone who wishes to try new tech and can afford it. And if they sell to enough people, it will be successful. I will try it, but I don't know how much time I want to spend moving around in my living room with that strapped to my head before I get tired of it. You know what I mean? IMO, The software will be vital to make it worth it. I don't care about little virtual robots playing games in a dollhouse. But I would be on-board for a space combat sim like Star citizen or something like it.

Cannot wait to try Morpheus. As long as Sony provides it with solid support. Should be amazing

Two things it needs to have a chance of success.

Get those two right and you might be on to something extraordinary Sony/VR people.

I don't think this is a fad that will simply go away. Yeah we will always be playing games on our tv's or devices but all these innovations such as vr, ps move, kinect ect.. They are all contributing to pushing technology forward. One day it will be on another level entirely but we get there one step at a time. The VR craze at the moment is just another step towards total game immersion. I hope one day we can plug into something like the matrix or like in sword art online lol that'd be sweet!!!

I own two Move controllers and one navigation controller yet I own only one disc based game that supports them. But I'm glad I got them as long as the PS4 will actually use them.

Vita wont be another psp -_-

I love Sony, don't get me wrong, but I'm done buying their products like this unless I absolutely can't have something on it. Sony tends to make nice things, but only half-ass support it. Move, EyeToy, Vita.... All have more potential, but very little support.

Build On the Back of Giants in The Wandering Village | COGconnected