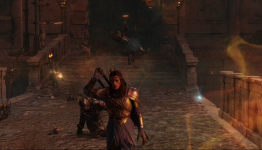 John says, "Middle-Earth: Shadow of Mordor launched last year to critical acclaim. The game even went on to win several Game of the Year awards including 8BitChimp’s Game of the Year for 2014. The newest DLC, The Bright Lord launched recently and I got the privilege to play it. I reviewed Mordor’s last DLC (Lord of the Hunt) and I was left unimpressed. Nothing really felt new and I felt it didn’t really add anything to the story. The Bright Lord on the other hand is great."

Adhttps://store.steampowered.com/app/1488200/Symphony_of_War_The_Nephilim_Saga/?utm_source=n4g&utm_medium=native&utm_campaign=sow_n4g_native&utm_content=png
- Comments (0)+ Comments (0)
TopNewestOldest
The story is too old to be commented.
70°2

What Shadow of War can learn from Mordor's Bright Lord DLC

Shadow of Mordor's Bright Lord DLC Is an Exercise in Branding