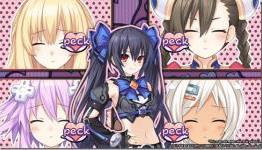 Siliconera:
Hyperdevotion Noire: Goddess Black Heart is a spin-off to the Hyperdimension Neptunia franchise made by Sting. It focuses on Noire, who won a poll to get a game focused on her. Truth be told, I hadn’t initially realized that I’d played any games by Sting. Then I glanced through their releases and spotted a few games I’d played, those being Yggdra Union and Hexyz Force, both of which I enjoyed. On the other hand, I’ve played every game in the Neptunia series as they came out. Yes, that includes Producing Perfection. To cut things short, I like the main series, but the spin-offs had everything to prove to me.