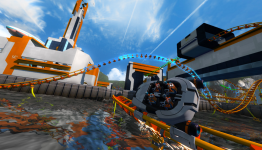 GP:
Microsoft Studios has been busy of late. For the last six months it has been steadily churning out new titles for the Xbox One. Some have been fantastic, some have been frustrating. With its ups and its downs, ScreamRide falls somewhere in the middle.

The rollercoaster genre has had a long history, but ScreamRide is one of the first to bring the joys of sandbox theme park action to consoles. Microsoft knows that the genre has a pedigree. ScreamRide hat-tips with a heavy hand to classics ike Rollercoaster Tycoon and has clearly been inspired by the zany humor of Theme Park and Theme Hospital.

Nice little review. IMO the 7-8/10 mark is spot on. Plenty of substance and loads of fun to be had.

Nice looking to pick it up soon .