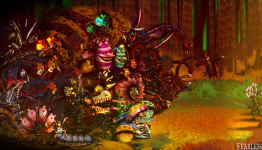 Mariah Beckman, GIZORAMA - "When I elected to preview Fearless Fantasy, it was the game’s unique and sort of unusual-looking, whimsical creatures that drew me in. The characters seemed, at a glance, to be cheeky, irreverent, and an homage to the FF empire, which was another draw. The gameplay mechanics, which you can see from the trailer, are unlike nine out of ten games that you will likely play this year: part Fruit Ninja and part pick-any-Japanese-RPG, this gesture-based remix is original, fun, and unpredictable. If you’re old enough to remember it, this game seems to emulate the Simon-Says style repeat-after-me games, like the 1983 Dragon’s Lair (which is also available for the iOS now, in case you’ve been waiting with baited breath). All of this smacked of intrigue to me."

Adhttps://www.releases.com/?utm_source=n4g&utm_medium=native&utm_campaign=c1
- Comments (0)+ Comments (0)
TopNewestOldest
The story is too old to be commented.
40°
9/10