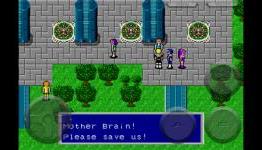 TouchArcade: This week's entry, like many of the games we cover here, is an interesting case. The Phantasy Star brand has cast a fairly wide net over the years, with its most popular entries being in the Phantasy Star Online series that started on SEGA's last piece of gaming hardware, the Dreamcast. The series got its start, of course, as a single-player JRPG series that spanned two generations of hardware. For whatever reason, SEGA brought just one of the classic games to iOS during that brief period of time where they were tossing Genesis games out by the bunch. So we're left with the odd situation of neither the first nor last title being available to iOS gamers, but one of the middle installments. At least it's the more well-regarded of the two middle chapters. As it happens to be the only one on iOS, I'm going to be talking about Phantasy Star 2 [$2.99] specifically in this article, but you just know I can't resist using it as an excuse to talk about the entire original series.

The Most Underrated Sega Genesis RPGs