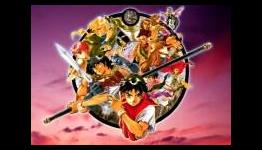 Cubed3:
There are a number of JRPGs that are considered classics, and while not all of them garnered the fame and widespread awareness as the Final Fantasy series, the others instead became cult classics, each with a ravenously loyal fan-base - the Tales series, Breath of Fire and Suikoden series, to name but a few. Much like Final Fantasy, it wasn't the progenitor of the series for Suikoden that made the mark on the world but a later instalment in the series, but how does this initial entry to the series compare to its more popular sequels and how does it stand up today?

Adhttps://www.releases.com/?utm_source=n4g&utm_medium=native&utm_campaign=c1
- Comments (0)+ Comments (0)
TopNewestOldest
The story is too old to be commented.
110°

What the Other 15 Games on the PlayStation Classic Should Be

Orchestra "VGM Music" to Create an Album of Suikoden 2 Music