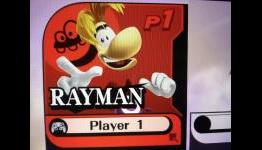 A new challenger is approaching! Ubisoft’s limbless mascot Rayman may be making his way to Super Smash Bros for Wii U.

Rayman is alright, but Im still hoping Lucas and Wolf get added when the DLC hits. And I just cant let go of the Ice Climbers...

I'm surprised they didn't bring Lucas back. I liked Lucas

I wouldn't mind seeing those characters as well. I would like to see Waluigi, Captain Toad and Shy Guy as playable characters.

LMAO! But cool if true.

I would say the biggest character i would want in a dlc is bayonetta. They'd have a ton of material to work with for moves, and i think she'd be a very original character. Also would help bayonetta 2 sales.

Thing is it'd be hard to be faithful to her character without being incredibly sexual, and that might prevent them from putting her in a game without even a T rating.

From 4Chan? I don't believe this is real but it would be cool...

Unless the next rayman is wiiu exclusive i doubt it after what happend with legends.

The character will be too powerful, can't include him, how can you hit his leg or arms?
What about striking below the belt, if you know what i mean.

Let's see what went down at Nintendo Headquarters:

Nintendo Developer 2: Which characters should we add?

Nintendo Developer 2: But there are still a lot of Nintendo characters that fans really want.

Nintendo Developer 1: Well none of our other characters are that popular anyway and to be honest I don't really like the rest of them.

Nintendo Developer 2: Oh yeah those characters are not that popular with our Japanese fans.

Nintendo Developer 3: But what about the rest of our fans in other countries?

Nintendo Developer 1: Who cares about the rest of our fans, we do what we want to do, are we not called Nintendo for a reason?

You try waaaaay too hard buddy.

You can never be too hard buddy. :)

Someone's forgotten that the final say is on Sakurai, since he's the one who does most of the hard work making them fit into the game at all.

That would explain why they sent over a very detailed model of Rayman to Sakurai back when he revealed the trophy.

That's really hard to believe when they'd have to remake an entirely new character model just to fit him into the game. And Sakurai's already working on MewTwo.

Ubisoft sent him a Rayman model earlier in development. So it wouldn't have taken him long to put him in-game.

uh he became a trophy

Yeah but if he is in-game as a character (which is very likely now that the video came out) using that model would have help tremendously.

4chan is not a reliable source. Nice click bait.

Pac Man deff belongs....Smash has third party mascots....Pac Man is Namcos mascot, just like Mega Man is to Capcom or Sonic is to Sega. Rayman is Ubisofts mascot so adding him makes sense bc the trophy made no sense being randomly thrown in the game for no reason.

I don't even like Rayman and I am excited. This opens the door to more characters if well received. Definitely supporting this by buying Rayman.

Now, how about Square jumps onboard and gives us Mallow/Geno/Booster already?!

As a character, Rayman would be great.

I would prefer Bayonetta, but I wouldn't mind Rayman.

What this makes me wonder about, though, if there's any truth to it, is WHAT THE HELL, UBISOFT?

Are you for or against Nintendo? MAKE UP YOUR MIND.

I thought there wasn't going to be any DLC in smash aside from mewtwo? Either way the more characters the better ;)

Who cares about Rayman? If we're talking third party characters being added the ones that would make the most impact amongst fans would be ones such as Bayonetta, Neku from TWEWY or bring back Snake!!

Can't wait to see all the plastic on his amiibo.
http://i.imgur.com/tSyAXdH....

Super Smash Bros Ultimate: Why Rayman Should Join the Fight