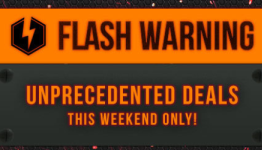 As is becoming more and more common, the PlayStation Store in North America will be holding yet another Flash Sale that runs through the weekend, this time with the focus on racing games.
- PSLS

Adhttps://store.steampowered.com/app/1488200/Symphony_of_War_The_Nephilim_Saga/?utm_source=n4g&utm_medium=native&utm_campaign=sow_n4g_native&utm_content=png
- Comments (58)+ Comments (58)
TopNewestOldest
Expand all
The story is too old to be commented.

How to Train Your Dragon's a racing game?

A lot of flying around on your dragon and timed stuff... so yeah I think it can be categorized as racing if anything.

I bought Asphalt Injection and Cel Damage(cross-buy PS3/PS4/PSV) I also came across a free-to-play game on Vita I never heard of before, Deathmatch Village.

Free to Play is an advertising gimmick.

Weird sale this time around.

Nothing for me here, though I like how Sony has been pushing a lot of deals like Steam.

A good example of how competition is good for the consumer :)

I don't think steam has any affect on what sales go on the ps store...sony has always been about good deals...

you got, shows just how much Sony has come over anything Steam can ever offer.

Whoo finally a PS4 flash sale... after I sold it. ):
Wtf one game? They really gotta step up PS4 sales man

I agree. Would not sell my PS4 anytime soon, though!

its a silly time to sell a ps4 dude.
lot of great games coming now

Yeah clearly that's what's needed with 10 million plus consoles sold before or just after destiny launched.

Clearly just pissed the xbone can't get over 5.5 mill. Playstation is wiping it's ass with the xbone.. it's hilarious.

He may have sold it. I sold my launch PS4 to buy the Titanfall bundle. then I saved up and worked some overtime for the summer and yesterday I bought the PS4 last of us bundle with a second controller and second son on the side (and knack for my kid). People sell things all the time for different reasons. I was called a liar as well on this site when I sold mine. Why would someone make that up?

Nothing but crap ? WTF I would be cheering if I only had something I could play this software on. That is one hell of a sale.

and gt6 wasn't on your release day purchase because?

bcuz of the ps4 i bought thats why

What's the best Need For Speed to get off this list for PS3? I'm more of a NFS Underground kind of person.

Hot Pursuit and Most Wanted are both good. Both have fun online play also. I recommend you stay away from The Run. The game is not very good but $5 isn't much money either.

Need for speed the run is the closest to underground.

1 game would seem bad, but considering the PS4 still has very, very few racing games, it's silly to expect anything else.

They should have given us something else then. I miss my PS3.

Could have at least had Need for Speed.

I bought Pure & Split/Second on Bluray a few months ago. both games were awesome. I'm still pissed that Disney shut down the studio that made these games

These sales look great until you see that the sale prices only include the base game, and all DLC is left at full price. Whenever a sale happens on Steam, everything associated with a game, including the DLC is all on sale at the same discount percentage.

I wanted to buy Ghost Recon: Future Soldier for PS3 during the last Flash Sale, where it said that they were selling the game for $4.99....Well, I went to go buy it, and it was the single player campaign only, and in order to play online, you had to spend either $10 or $15 for the online pass, and then there are 3 or 4 DLC packs for $15 each, so I didn't bother.

Steam on the other hand, has had the same game on sale with all of the DLC for somewhere in around $10.00. The only reason I haven't bought it on Steam is because the game seems to have some annoying issues on PC according to people in the Steam forums.

Something I have always hated. Even with older games that you can get for $15 but with all the DLC it would be 4 times that.

Midnight Club went on sale with the Rockstar Sale I believe

Need For Speed on the Vita is one of the best games it has! That's a steal for anyone wanting to buy it!

Probably going to get Grid: Autosport and Split/Second. Had bought Split/Second when it came out but for some dumb reason I got rid of it. Was such an awesome game. Hopefully I can tear myself away from my PS4 to play them.

Split Second for $5 is a steal!

Which Need for Speed should I buy?? Haven't played them in a looong time. (Side note: Grid 2 was free for PS+ months ago)

Well I guess thats gonna be the free PS4 game for PS+ next month.

Does anyone know if these flash sales ever happen on the UK store?

The price difference on some of these games are quite insulting to us UK based customers! Though some of us have both a UK and US store account with the vita we are tied to one account (unless we have multiple vita memcards and fancy resetting it between psn accounts)

when I saw that most wanted was $4.99 I went to check UK store to see its still £39.99. My lads really want this game for their vita's but I'm not going to pay that price for 2 copies of a game that was released almost 2 years ago.

That's the exact game I wanted :)
I couldn't believe the price difference though :(

As I mentioned I have a US PSN account I can access on my PS4 but it's too much of a slog to reset the vita and use a separate memory card.

Come on Sony, sort out your pricing! - or enable multiple users on the vita! ;)

As a ps4 owner, that was just a sad list

What's sad is this stupid sentiment that seems to forget reality.

How many racing games are on PS4?

How does the amount of racing games somehow make this list better?.

Im suppose to throw my arms up in the air and cheer that the one game for ps4 on the list is a racing game, because there are so few already on ps4?.....

In my eyes the amount of racing titles on PS4, is an entirely different problem

Yep, what racing games? Doesn't matter. I have a G27 racing wheel and can't even use it on PS4. Graphics can't fix that. >=|

this week is a good week. I was wondering when they would have a racing genre sale and it happened.

When the article mentioned PS4, I got excited. And then I saw that only one game which I don't care about at all is ps4. Thanks for getting my hopes up. Thanks.

Some good deals here. I'm getting Motorstorm and Most Wanted.

Sonic & All Stars Racing Transformed - Still Perfect After All These Years

The Most Hardcore Offline Android Games