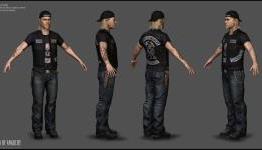 Sons of Anarchy Game will be available for Tablets only

SegmentNext - "Creator of the FX Biker Drama, Kurt Sutter revealed that Sons Of Anarchy Game will only be available on Tablets, not consoles."

I remember how Sutter went on a passionate rant many seasons of SoA ago explaining how he wanted any game based off of the show to be substantial and powerful, to be a "real" game; something that would affect the user from both an emotional and technical (gameplay, graphics, cinematics) standpoint. The developer had to have the chops to make it, or they wouldn't be considered; the graphics and writing had to be top-of-the-line, or Sutter would dismiss it; the overall quality needed to be something respectable not only by people looking to make a buck off of the SoA franchise (pretty simple these days), but something gamers themselves would appreciate-- and Sutter claimed to be one of those gamers.

I'm not saying tablet games can't accomplish these specific things, but I'll be damned if this doesn't sound like someone selling their franchise up the river to the highest bidder because their initial plans fell through.

I recall him whining about how there was "no interest in the gaming world" or something like that, which likely translates to "I didn't like their terms & conditions." While that's not entirely his fault, it's also not grounds to claim some portable tablet game is going to be a fantastic representation of the SoA IP when he was not only shopping around a much more grandiose and promising vision of the potential game before, but quite blatantly badmouthing "lesser" experiences, i.e. anything that wasn't a AAA console title.

I guess the perspective naturally changes once your IP is at a crossroads: in this case, the show is about to end and interest in a potential game will only fade away after it ends. Funny how when it was in the midst of its popularity a few seasons ago, it was a much different approach.

Three for Thursday: Games Based on TV Shows