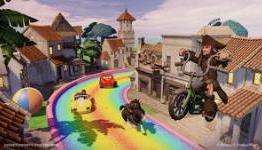 Disney Infinity is now free on Wii U

Disney Infinity's Marvel-based sequel is coming next month on every console except for the Wii, which has since been left in the dust by its successor, the Wii U. As a result, Disney is letting players download the original Disney Infinity for free on the Wii U eShop, where its base and figurines are backwards compatible with the Wii game.

eurogamer.net
Disney Infinity Is Available For Free On Wii U If You Already Purchased It On Wiitrendymatter.comfaddi

Adhttps://www.releases.com/?utm_source=n4g&utm_medium=native&utm_campaign=c1
- Comments (15)+ Comments (15)
TopNewestOldest
The story is too old to be commented.

You know, free digital downloads for the games would probably be the better approach. The toys are already pretty expensive and there is a lot to collect. Looks like I can get this now lol.

Since the game (to my knowledge) doesn't have micro transactions, I don't think this is a good idea. Yes, the figures are in fact quite expensive, however the game still costs millions to make, this probably wouldn't be a good idea when it comes to making their money back. Now if I'm wrong, and it DOES have micro transactions.... then yes, the base game should be free.

I doubt there is a risk in this case . There is no chance a kid into this wont pester its parents to get the 2.0 version as well .

They are just providing the gateway trap .

EDIT :
So it seems it's aimed at the people who already have the game on Wii, as the sequel won't be coming out on that platform , so they'd still keep being customers

Unless Microtransaction are coming in (again, like you, I have no idea if they do already). Remember they are only trying to get people to buy the sequel so giving the away for free on an ecosystem that never got it might be a good strategic move (though I feel the idea of a sequel is mind boggling and I am sure the consumer is going to get really confused unless they make the shop bought stuff cross compatible)

"With other consoles, the PS4 version of Disney Infinity 2.0 will work with the PS3 game's base, but the Xbox One version requires Xbox 360 players to buy a new base"

I understand you cannot do anything in the game without figurines so its the same as microtransactions..... I really hate this figurine thing because I love Disney and would get onto this but don't care about collecting toys and not willing to spend hundreds in figurines just to get the same content as an average game

I understand what you mean, and also don't like having to buy figurines. Though, a $15 or so figurine, is MUCH more than a microtransaction. Microtransactions are a dollar here, or 2-3 dollars there. "No big deal" purchases you don't realize you just spent $100 in the last week on. Those suck, and I hate them, which is why I usually steer clear of games with them. Or just have a strict policy NOT to ever pay for anything in a free to play game.

ALSO, this, and games like it, are games geared towards kids who are still into toys. Because yes, they get the game, and interaction with it, however they also get a toy out of it as well, and can still "Play" the game even when they aren't actually playing it. It't a dual purpose that works out in favor of the parent, AND child.

@Spenok, I understand the game is made for kids who like toys, and guess its o.k for them even if it sucks for me, but what I meant is that giving the game for free can only help them sell more figurines since people cannot do anything without the figurines so no risk on doing that

With the game Activision stands to share profits with other companies. But the toys seem to make them a lot more money so making the games cost less or even nothing may actually entice people to buy many more of the toys.

Good way to get the Wii owners to carry over and buy a Wii U, without making them pay a ton more than they should.

You must get a base somewhere though, and so far that has not been easy for me.

Ah dang, I didn't think about that. I hope those don't cost too much. :(

i wish they made up a larger overarching story in this game where you could play as any toy/character rather than just separate mini-adventures where you're restricted to certain ones.

Yeah. They released so many characters but very very few adventures it made it kinda boring since you were locked yo characters of said adventure. I agree they should allow you to bring any character into any adventure as long as one main one is playing. More adventures would be nice too. Why have Frozen and Wreck it Ralph toys if you don't give them adventures limiting them to only the toy box.

The Magic Of Toys-To-Life

4 Disney Games We'd Love To See on the Switch

10 Disney Games That'll Give You the Feels

Toy Story’s Greatest Video Games: To Infinity And Beyond